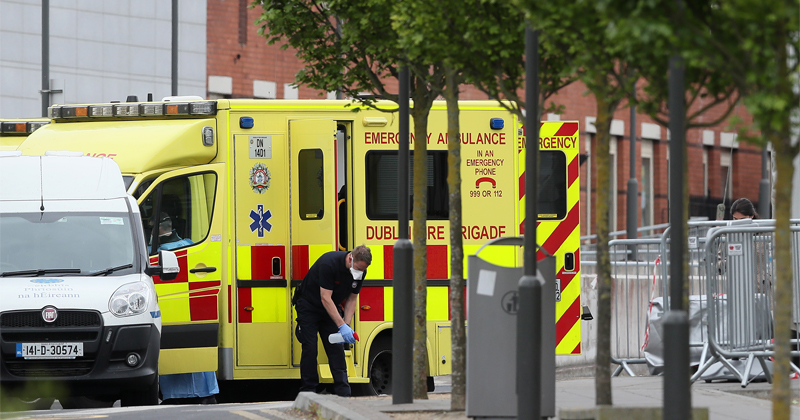 An Irish teenager was stabbed by a gang of black youths in a park in County Cork on Saturday night. He has since been released from hospital.

The attack happened in the small town of Carrigaline, in County Cork. News reports claim the Irish teenager was stabbed by the gang because he refused to give them €2 for the bus.

In a video widely posted on social media, the teenager can be seen lying on the ground, while a girl, widely reported to be his girlfriend, is huddled over him, attempting to shield him from any more blows. “He’s dead, he’s dead,” someone can be heard shouting.

As the girl attempts to protect him, the one filming tells her to “shush b*tch,” while another of the attackers, identified as “Stephen” by the cameraman, goes in for another repeated stabbing. “You’re shanking this fiend,” he says.

Disgusting video of an Irish boy being stabbed by black teenagers today in Carrigaline, Co. Cork.

They continue to slash him and laugh while he lies on the floor bleeding. pic.twitter.com/CZomiDPsBz


The teenager was released from hospital on Sunday, and is recovering at home. However, the teenager who allegedly stabbed him, was simply charged with robbery and assault causing harm, and was released on bail, with the Irish police or prosecutors having no objection to the release.

Donnchadh Ó Laoghaire, the Sinn Fein TD for Cork South and a long time “advocate of greater social media regulation,” claimed that the video should not be shared “out of respect for the victim,” and that spreading the names of those involved could apparently endanger the investigation.

Please also be aware that sharing names of people involved in the incident could undermine chance of convictions. Talk to Gardaí, social media is not the place.


Some online noted that leftist politicians did not make the same remarks when the video of the killing of George Floyd was widely circulated, and argued this was only the case because the victim was white and the attackers were black.

The National Party of Ireland decried what they saw as an attempt to censor the story, saying that they would “not be complicit in its covering up.”

Sinn Féin want to Section 31 this story. We won't be complicit in its covering up. #Censorship #Carrigaline https://t.co/RZRnykTDrZ


A GoFundMe was set up for the teenager, and received over €6000. It was then shut down, as leftist activists, including a radio host, claimed it was set up “as a front by a far-right group,” intending to pocket the money. This was denied by the organisers, who even offered to hand control of the go fund me over to the radio station to prove their intent.

Retract this bile @pjcoogan. We’re willing to transfer donations to a reliable 3rd party, even 96fm! It’s no “front” no “far right”. Just €6500 public donations to support Adam and his family. No politics, no conditions, no publicity. What could you possibly have against that? pic.twitter.com/E9tx762F6M


@pjcoogan of @Corks96FM is attempting to stifle over 6k in donations reaching the Noonan Family..

I have offered to hand control of the gofundme to @Corks96FM prove sincere motives.

96fm pretend they care whole slandering those who wish to help.#JusticeForAdam pic.twitter.com/41dc69EAqs


The campaign is now reinstated, albeit suspended until further investigation by GoFundMe.