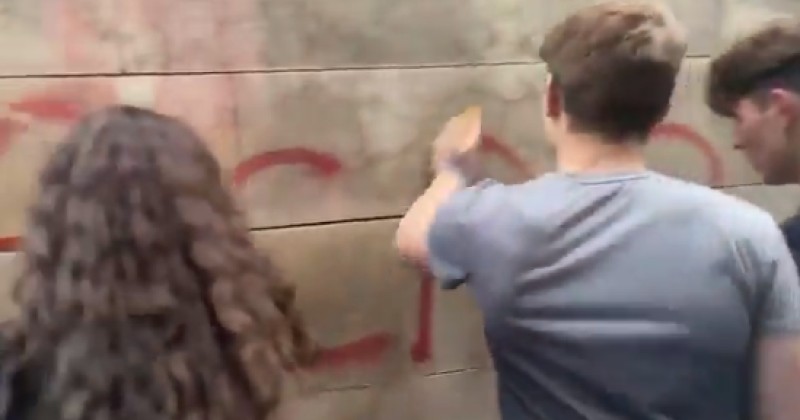 Two videos out of the U.S. and the UK both show good samaritans trying to clean off BLM graffiti from buildings and monuments being harassed and called racist.

The first clip shows three young women scrubbing ‘BLM’ graffiti off the side of the Lafayette Building in Washington, DC.

“Why are you guys removing Black Lives Matter graffiti?” asks the woman filming the video, whose name is likely to be Karen.

One of the girls then explains how they are removing the graffiti, prompting Karen to ask, “But why do you want that to come off?”

Another of the girls explains that it’s vandalism, to which Karen responds, “So you don’t care about black lives then?”

The confrontation ends with Karen lecturing the girls, “Not a great way to use your white privilege, ladies, that’s disgusting.”

Another video shows a group of young men trying to remove anti-police graffiti from a war memorial in London.

“Couldn’t even wait a day, not one day, because of their precious memorial,” snarks the girl filming the clip.

They are the berated by another woman for the sin of attempting to clean the area by picking up discarded Black Lives Matter signs.

The woman recording the video then says, “I’m gonna get their faces in, everybody say cheese,” as part of an apparent effort to doxx the young men.

The men responded by laughing at the women.