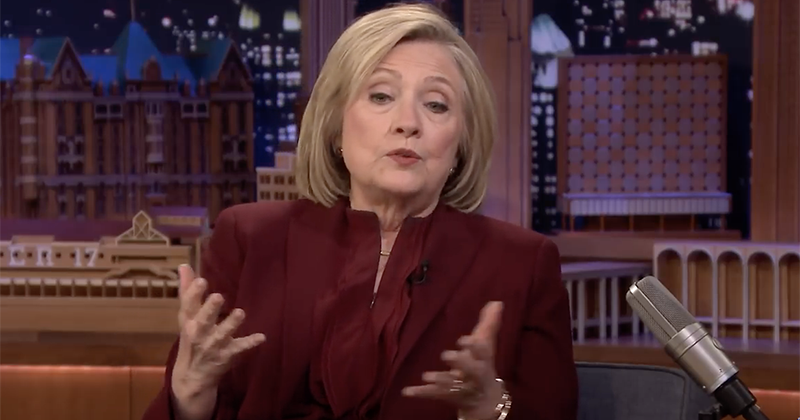 Appearing on The Tonight Show, Clinton told Jimmy Fallon “I wish I could say I was surprised.”

“This is something that you can’t just insult or pretend is a hoax, despite how [President Trump’s] trying.” Hillary added.

“You really have to listen to people who actually know something,” she continued.

“There’s a terrible shortage of testing kits. They need to make sure state and local health departments, governors, mayors, and others, have what they need with hospitalization. There’s a lot of work to be done and if he will quit calling it a hoax and actually let the experts do their job, I think that will work out better.” Hillary complained.

Fallon offered no push back, and of course, the whole chat was orchestrated for Hillary to whine about Trump again.

After initially blaming The President for the coronavirus spread, Democrats and the leftist media continue to falsely claim that Trump said the entire outbreak is not real.

Politico published an article last week claiming that Trump called the coronavirus a “hoax” at his rally in South Carolina.

The article claimed that Trump “tried to cast the global outbreak of the coronavirus as a liberal conspiracy intended to undermine his first term.”

In reality, Trump referred to “politicizing” of the coronavirus by Democrats as “their new hoax.”

“The hoax is on them. I’m not talking about what’s happening here. I’m talking what they’re doing. That’s the hoax,” Trump later clarified, according to NBC News.

Democratic dropout and serial finger licker Mike Bloomberg also spread the fake claim, before he withdrew from the race:

Here it is, folks. With a pandemic at our doorstep and the country looking to its president for leadership, Trump decides to call the coronavirus… a "hoax."

Michael Bloomberg repeated the false claim that President Trump referred to the coronavirus as a "hoax."

CBS News' Scott Pelley pointed out that President Trump actually said the media & Democrat hysteria about the government coronavirus response was a hoax, NOT the virus. pic.twitter.com/HmSWsnaQFw

Deranged Democrats will literally repeat debunked nonsense again and again to attack the President, even though it is obvious to the public that they are lying.