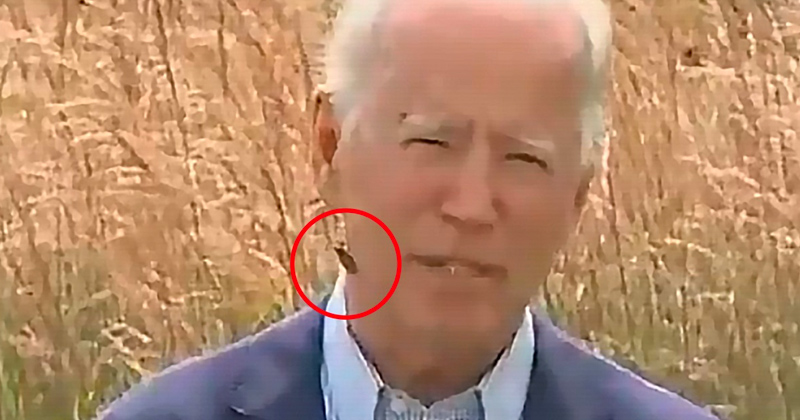 Video footage shows a large bug harassing and latching itself onto the head and neck of Democratic presidential candidate Joe Biden as he gives a speech about “environmental justice” in front of a crop field.

“The unrelenting impact of climate change affects every single solitary one of us,” Biden says, “but too often, the brunt falls disproportionately on communities of color, exacerbating the need for exiromental, for, environmental justice…”

Biden then reaches up to his neck to rip the insect, which appears to be an oversized locust, off his neck and shoo it away.

“Sorry, that was a bug. Speaking of the environment,” Biden quips.

The bizarre clip can be seen below.

The massive continued to torment Biden for the remainder of the speech, repeatedly landing on the former Vice President’s head and neck.

Joe Biden ventures out from his basement and bugs descend! pic.twitter.com/RqnbejrW54

The campaign staffer responsible for setting up this Joe Biden bug backdrop today is probably going to need a new job. pic.twitter.com/Q0UvSgcWVe

Biden could be seen repeatedly swiping at his face to dispel the winged pest, only for it to return and latch on to his head moments later.

The experience left such an impact on Biden that he could be seen involuntarily checking his head for insects with his hands as he walked away from the podium at the end of the speech.

Joe Biden again hurries away from reporters’ questions after his speech checking for bugs https://t.co/Z57UPCoAl8 pic.twitter.com/9EXTIWRbrn

Biden’s increasingly rare appearances on the campaign trail ave been plagued with misfortune. In a recent speech, Biden slurred his words repeatedly when discussing the pharmaceutical industry:

“Under President Trump’s US trade deficit has grown, it’s at an all-time high. Let me say that again, the US trade diffi-deficit is at an all time high,” said Biden, before accusing President Trump of causing this outcome by lowering taxes.

Biden continued, “President Trump’s answer to all this is the same as his answer to everything: corporate tax giveaways that actually ward off shoring,” appearing to flub again. “You heard me right, they actually reward offshoring.”

“No industry has taken a great advantage of Trump offshoring tax loopholes than the pharmaceutical indusse,” Biden went on, accusing the president of giving preferential treatment to pharmaceutical companies. “All while raising their prices on prescription jugs that union families and working families have to rely on.”

Democratic vice-presidential nominee Kamala Harris has gradually taken over the lion’s share of public campaign interaction with the media in recent months.

The twitter algorithm will apparently give a warning to users of pedophilia over the Joe Biden clips where he is a bit too close with children.