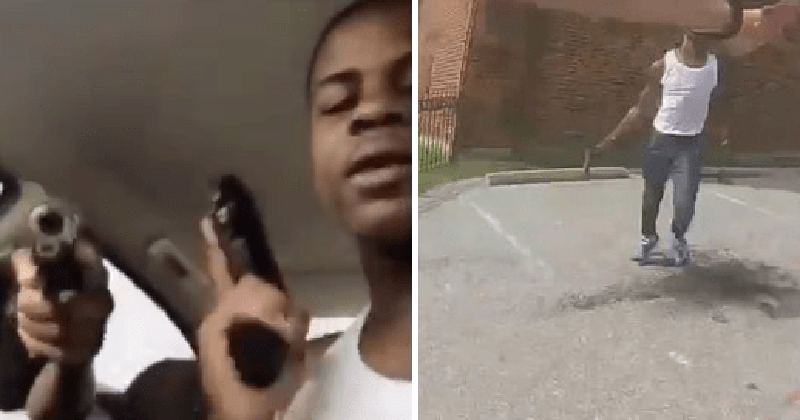 A black teen who was shot and killed by Washington, D.C. police was found to have posted an Instagram video waving a gun around with a masked friend prior to his fatal interaction with the police.

Deon Kay, 18, was shot dead by police in Washington D.C. after he ran at an arresting officer while brandishing a firearm. In bodycam footage released, the young man is clearly seen carrying a gun and charging at the arresting officer before he is shot once in the chest.

Activists used the footage as a pretext for police reform, calling for non-lethal methods of threat neutralization and even asserting that he had thrown his gun on the ground.

BREAKING: Body camera footage just released from yesterday's fatal shooting of 18yo Deon Kay in DC. The officer could have used "less-lethal tactics" but chose to SHOOT him instead… Even after he threw his gun on the ground. We need police reform NOW. #JusticeForDeonKay pic.twitter.com/4QR4htb82Q

Footage was uncovered from a now-inactive Instagram account belonging to the deceased teenager where he proudly shows off his firearm with a masked friend who is also flaunting his weapon.

The arresting officer, who was identified as Alexander Alvarez, said that he fired once at the suspect before the suspect lost control of the weapon. At that point, Alvarez’s colleague was able to detain the suspect.

Owen is joined by Ali Alexander to discuss Biden voters, the many ways the Biden campaign is falling apart, and what Trump needs to do next.

Kay, who suffered one gunshot wound, later died in hospital.

“During the foot pursuit, one of the suspects brandished a firearm. In response, an officer discharged their firearm one time, striking the suspect,” the MPD statement said.

Police confirmed that Kay was known to law enforcement and believed to have been a member of a local gang.

According to Fox5, over 100 protesters demonstrated outside the D.C. Police Department’s 7th District station in scenes that have been all too familiar throughout the summer.

The following day, protesters flocked outside Mayor Muriel Bowser’s home as thousands of people across the country have been out in full force over the summer to protest police brutality and systemic racism.