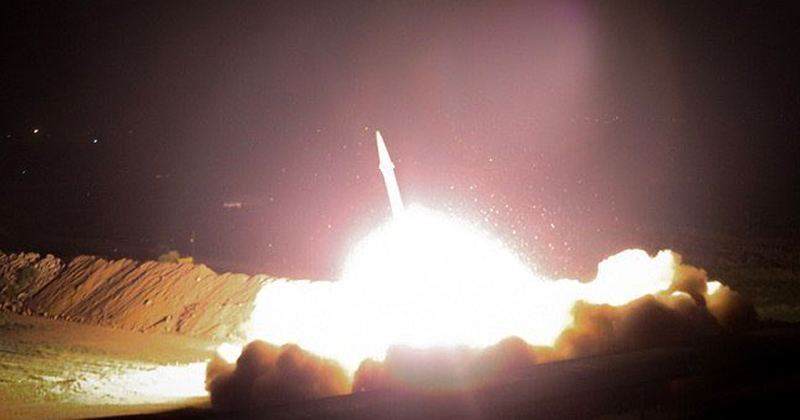 UPDATE: The Pentagon deployed 6 B-52 bombers to the Diego Garcia Air Force Base in the Indian Ocean following reports of Iranian strikes Iraqi military bases.

More on this as it develops… Original story below…

Videos circulating on social media claim to show Iran launching ballistic missiles at a military base in Iraq, which many claim is housing US military service members.

BREAKING VIDEO: Suspected Iranian originating rockets seen being launched toward military base housing US forces in Iraq moments ago. pic.twitter.com/qxnBlV0Kgx

VIDEO: Footage allegedly shows the moment a missile fired from Iran strikes the Ayn al Asad base used by US forces in Iraq. pic.twitter.com/V0oxYJErPk

A statement from the Department of Defense Tuesday laid blame on the Iranian regime.

We are working on initial battle damage assessments.

In recent days and in response to Iranian threats and actions, the Department of Defense has taken all appropriate measures to safeguard our personnel and partners. These bases have been on high alert due to indications that the Iranian regime planned to attack our forces and interests in the region.

As we evaluate the situation and our response, we will take all necessary measures to protect and defend U.S. personnel, partners, and allies in the region.

Due to the dynamic nature of the situation, we will continue to provide updates as they become available.

Reports from Fox News claimed missiles hit multiple locations in Iraq early Wednesday, with “tens” of missiles striking near the Al Assad Air Base, which Trump visited in December 2018. A base in Erbil was also reportedly hit, according to ABC News.

The source told Fox News’ Jennifer Griffin: “Under missile attack from Iran. These are either cruise missiles or short-range ballistic missiles. All over the country.” The missiles struck near Al Assad Air Base in Anbar, among other locations. There was no immediate word on injuries or damage.

#BREAKING #NOW
Iranian state television confirms that the missile attack on the American base of Al-Assad in central Iraq was carried out by the Iranian Revolutionary Guard and that it is the first response to the assassination of #Soleimani.#Iran #USA #IRGC #Trump

One photo purported to show a missile launch.

We are aware of the reports of attacks on US facilities in Iraq. The President has been briefed and is monitoring the situation closely and consulting with his national security team.

The strikes come in the wake of a US strike on an airport in Baghdad which killed the leader of the elite Quds Force Qasem Soleimani.