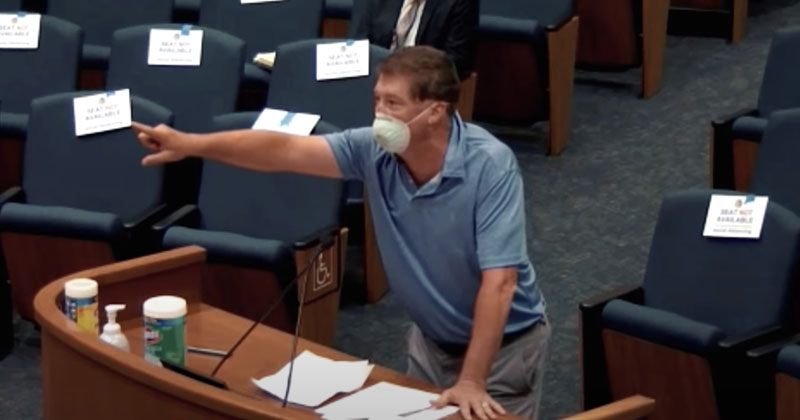 A journalist laid waste to a panel of California officials in an epic speech over their over-the-top coronavirus lockdowns which have caused incalculable damage to the nation.

Speaking before the Ventura County Board of Supervisors earlier this week, journalist John Ziegler laid out his grievances with the coronavirus shutdowns and masks in an explosive speech that has since gone viral.

“This board is pretending that for the last three months, your emperor, Dr. Levin, has not been against a mask declaration,” Ziegler began. “Now all of a sudden, we’re pretending that masks are everything, even forcing speakers to use masks.”

“Or do you not really believe that he was wrong, you’re just wearing these masks because it is a signal of your great virtue?” he continued. “Because for the last three months we have not worn them, and Ventura County is done outstandingly well, and continues to do outstandingly well because we are not Los Angeles, we are not New York City, we were never going to be any of those things.”

Ziegler went on to point out how wrong the experts have been, namely Ventura County’s Medical Director Dr. Levin, over the estimated deaths.

“Ironically, this was one of the things Dr. Levin was actually right about,” Ziegler said. “He has been wrong about everything. He’s the one who told us we’d have 4 to 600 hospitalizations a day. He revised that to 2 to 4 hundred a day. We still haven’t reached that in one day. We’re barely over 200 for the entire ordeal that you guys have put us through.”

“We’re now panicked over 51 total hospitalizations in a county with eight hospitals! Can you people do math? Can you please do basic math and understand where we are on this?”

Ziegler then warned the board that they would be held accountable for their reckless actions that totally upended the livelihoods of the working class.

“This is not a crisis,” Ziegler declared. “You however, have created one! You, in an effort to prevent all death, when we’ve had 43 deaths, have now ended all relevant life. And you should all be ashamed of yourselves. And this will never be forgotten, ever be forgotten! You will all be held accountable eventually, in this life or the next!”

“Ya’ll better hope there’s no hell, because when you die, that’s where you’re going, and guess what? You’re not going to be dying of COVID either,” he concluded before storming off.

Don’t miss this shocking report as Owen exposes the dangers of wearing a mask on a regular basis!