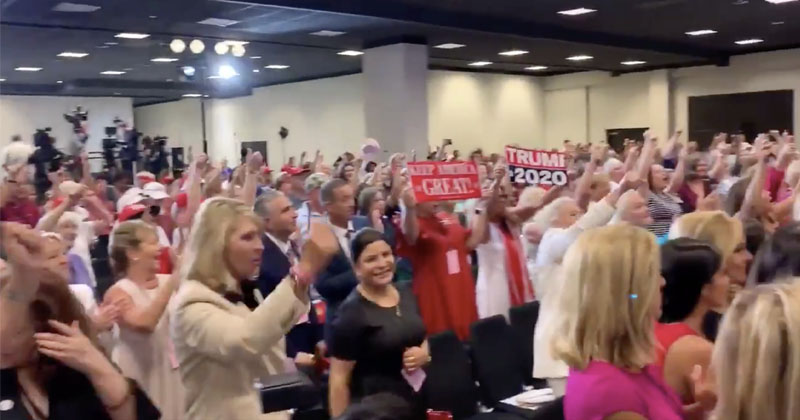 Speaking at the Valley Forge Casino at King of Prussia, Pennsylvania on Tuesday, Trump asserted that her father-in-law will be re-elected despite the widespread negative media coverage of his presidency.

“I always say that I think this president will easily be re-elected because he has delivered on all the promises he made in 2016 and so many more, right?” Lara Trump said. “Despite the fact that he’s had constant, 93% negative media coverage by the way.”

In additional video contradicting the MSM’s narrative that women hate President Trump, a massive group of Trump-supporting women can be seen chanting “Trump!” in the packed room.

This crowd is bigger than the Democrat candidates rallies! pic.twitter.com/yPYlXWqaW9

Many of the women at the event felt they benefited from Trump’s economic policies and credited him with their interest in politics since 2016, noted CBS Philly reporter Joe Holden.

“Those I spoke with in the crowd expressed varying degrees of interest in politics,” Holden said. “Many credit the president for their own positive financial circumstances. A handful of women indicated they had never engaged in political events before 2016.”

He added that many of the women came to Trump’s defense over his recent criticism of Democrat Reps. Alexandria Ocasio-Cortez’s and Ilhan Omar’s anti-American comments.

“From public safety to economic opportunity, women have directly benefited from President Trump’s policies,” Castillo said. “The Women for Trump coalition will be a national effort to mobilize and empower women who support President Trump to help get the message of ‘Promises Made. Promises Kept’ into their communities across America.”

“Unemployment for women is at its lowest level in over 65 years, and nearly 3.1 million new jobs have been added for women since January 2017. The strong support by women across the country will ensure a second term for the President.”

The media ran headlines right up to the day of President Trump’s July 4 speech predicting only a “tiny crowd” would show up. In reality, photos from the event show crowds stretching the full length of the National Mall. Alex Jones breaks it down.