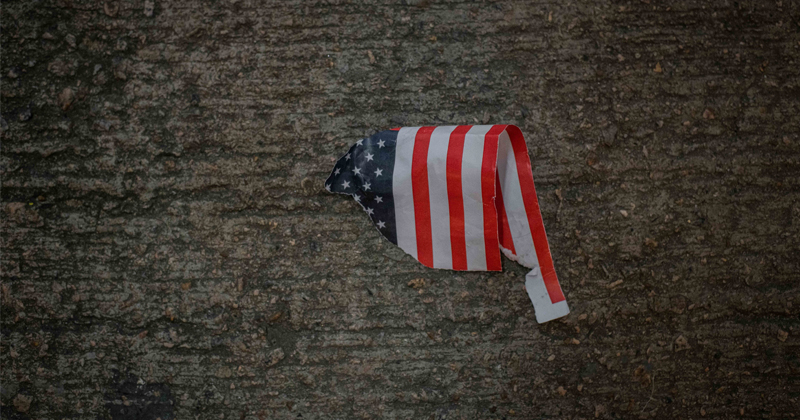 “Hey, f**k your sh*t!” the man shouts, before spitting on the flag.

SPITS on American flag and calls it a symbol of “white supremacy”!


The incident occurred last week, when Williams — who appeared on stage with President Donald Trump at CPAC last year after being assaulted on the campus of UC-Berkeley — was in Santa Cruz for an event titled, “Free Speech and Campus Activism.” Williams was tabling for the event, along with College Republicans President Dyland Temple, when the incident occurred, The Washington Examiner reported.

In the video, a protester grabs on to an American flag Williams was holding and shouts, “I think this guy’s trying to assault me.” As Williams tries to wrest the flag from his grasp, the two slam into the College Republicans booth. Williams prevails, but then the protester stands up and pulls the College Republicans sign from the booth, proceeding to rip the sign and spit on another American flag as he walks away.

Williams told the Examiner that the protester was attacking “the UCSC College Republicans’ property as well as desecrating the flag. I was holding a Trump 2020 flag, the assailant grabbed it, pulled the flag towards themselves, and then pushed me down into a large formation of jagged rocks. I was still holding the flag when struck, and when I hit the ground.”

When the protesters left, Tempe followed them until campus police arrived.

“I am scared for my physical safety as I see Hayden’s assault as an escalation of this effort to harass and intimidate me and members of the UCSC College Republicans,” Tempe told the Examiner. He said he intends to press charges for property damage, and Williams said he plans to press charges for assault.

Scott Hernandez-Jason, the campus’s director of news and media relations, told the Examiner that officials were aware of the altercation and that campus police were investigating.

“UC Santa Cruz is committed to ensuring that all members of our campus community are able to exercise their constitutionally protected rights of free expression, speech, and assembly, and that they are able to do so in a safe environment. Free speech is uniquely important to a university, as it allows for the open exchange of ideas integral to our fundamental missions,” he said.

Williams said this was “at least” the sixth time liberal protesters have subjected him to violence. Almost exactly one year ago, a protester was filmed threatening to shoot Williams and then proceeding to punch him in the face.

At CPAC last year, Trump said that Williams “took a hard punch in the face for all of us.”

“Violence towards conservatives is normal on the plurality if not the majority of college campuses in America, and conservative students face these kinds of struggles every day. Only through persistence and having our voices heard can we ever expect to change this toxic culture,” Williams told the Examiner.

News of this latest altercation comes amid a flurry of violence against actual and perceived Trump supporters. Last week, a Florida man brandished a cane sword at Trump supporters in Dunnellon. He has been charged with 10 counts of assault.

On Saturday, a man crashed his van into a tent where Trump campaign volunteers were registering voters in Jacksonville, Florida. That driver later confessed his animosity to Trump and compared the president to “someone s****ing on your grave.”

Earlier this week, a woman sucker-punched a man in a New York City bar because he wore a MAGA-style hat reading “Make Fifty Great Again.” On Thursday afternoon, police arrested a man after he allegedly assaulted a 15-year-old Trump supporter and two adults tabling in the New Hampshire primary.