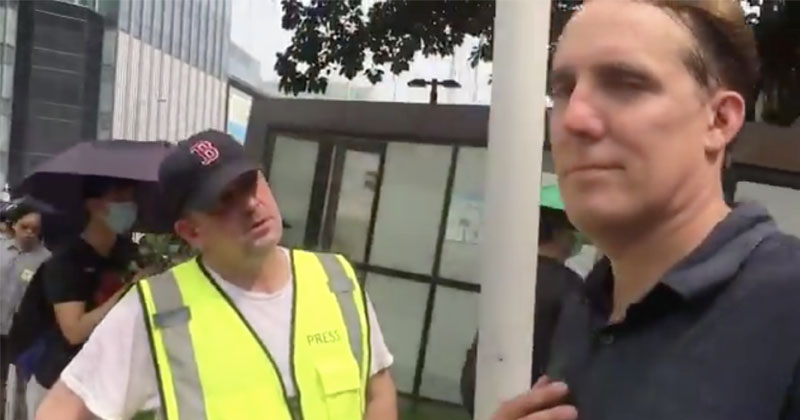 Infowars is on the ground in Hong Kong covering the massive anti-ChiCom protests, and the mainstream media couldn’t be more unhappy about that.

But when a couple of MSM journalists tried to ridicule Infowars as “conspiracy theorists” during the demonstrations, Hernandez clapped back.

In the middle of conducting interviews with protesters today, I was mocked and called a conspiracy theorist.

Stop wasting time focusing on my journalism and do your job and give the people of Hong Kong a voice.#LetHKSpeak pic.twitter.com/3bBcPPorxl

I did not march for 4+ hours, conduct hours of interviews and experience tear gas to be discredited. MSM is so jealous of real journalism that all they can do is attack it.

The mainstream media is terrified that Infowars has come to fill the void of real journalism that they’ve long ago abandoned.

One demonstrator explained to Infowars why Pepe the Frog has become a symbol of freedom against Communist China.

Another protester described the clashes between the demonstrators and police forces, where he sustained injuries from rubber bullets.

Protestor explains some of the injuries he has sustained from rubber bullets fired from #HongKongPolice pic.twitter.com/bzSniwAkMB

I talked to Ryan, on his thoughts as to why the stations are being shut down, and what the government's ultimate goal is in doing this. #HKPoliceState pic.twitter.com/56Dq5zRQN0

Thousands took to the streets in Hong Kong for an anti-surveillance protest.

Majority of the protests were peaceful. Many children also present in the marches. #HongKongProtests pic.twitter.com/s77iAxJxUE

Alex Jones supports Hong Kong and its people’s fight for their freedom from communist Chinese rule.