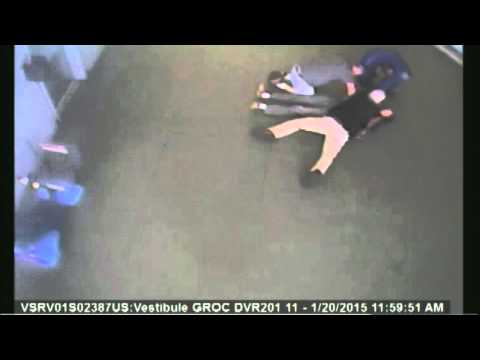 A Florida man was arrested and charged with assault Tuesday after he blindsided a legally armed Walmart shopper.

Newly released footage shows Foster following Daniels inside the store where he grabbed the shopper by the neck, threw him to the floor and placed him in a chokehold.

While grappling on the ground in full view of other customers, Foster reportedly shouted that Daniels possessed a weapon, while Daniels unsuccessfully tried to tell Foster he had a permit for his handgun.

When police arrived, they discovered Daniels was indeed a lawful concealed carry permit holder, and proceeded to arrest Foster for battery.

At least one witness who saw the clash unfold agreed that Foster should have been arrested.

“He doesn’t even know who the victim is,” Walmart shopper Manton Sameuls told Fox Tampa Bay. “But he just goes and attacks the man and throws him to the ground, necklock him, for what? Why? What did the man do?”

Following the incident, Twitter users grew enraged after a notorious gun control advocate suggested that the man who tackled the permit holder was in the right.

Man arrested for tackling man with gun at Walmart. Because America. http://t.co/reEtSGvKr3 #gunsense

Users were quick to point out that the seemingly clueless anti-gun crusader was apparently advocating violence against law-abiding citizens.

@shannonrwatts Because assaulting innocent people is ILLEGAL. Yes, because America. Nation of laws. Sorry that's inconvenient for you.

@shannonrwatts a law abiding ccw holder is assaulted. Do you support this watts?

Shannon, why are you upset that he was arrested? Do you want ppl just to attack lawful gun owners? #gunsense @shannonrwatts

@Soldier1eaODGrn @twitchy He could have been a plain clothes LEO for all that man knew. Bet that wouldn't matter to @shannonrwatts

@shannonrwatts So you're promoting assault on someone who is observing his legal rights? You've lost it lady.

@shannonrwatts put the box wine down and realize assault and battery is a crime. Carrying a legal gun is not. Tell Bloomberg hi.

.@shannonrwatts It must hurt to be this dumb. #gunsense

@shannonrwatts Geez, are you really this stupid?

Dumbest woman in the world @shannonrwatts is upset that police arrested a man for assault. http://t.co/FAKZGfj5O5

@BooRadl11994812 @shannonrwatts she has her own weapons grade stupidity

Foster’s actions illustrate perfectly how effective the establishment’s anti-gun propaganda campaign has been in brainwashing the public into perceiving guns as evil, as Attorney General Eric Holder has admitted was the plan all along.

“What we need to do is change the way in which people think about guns, especially young people, and make it something that’s not cool, that it’s not acceptable, it’s not hip to carry a gun anymore, in the way in which we’ve changed our attitudes about cigarettes,” Holder outlined at a Women’s National Democratic Club conference in 1995.