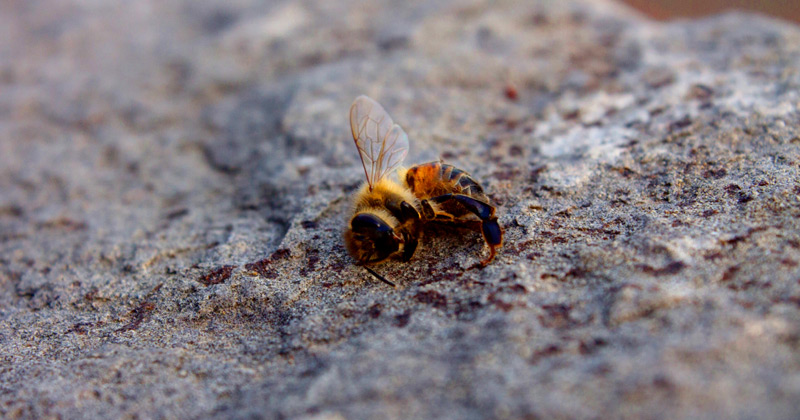 In the video, published last month, the man films numerous small honey bees lying dead on the ground in Sierra Madre, as he stands between the two towers he believes are emitting deadly 5G radiation.

“I find it interesting that they have these things up here and they don’t even know if they’re safe for people,” the man says, “but I can tell you they’re definitely not safe for the environment because it is killing bees all over the place over here.”

At one point he also witnesses one bee fall to the ground.

The man filming says he’s been there several times and noticed dead bees, but it was the first time he’d noticed the bees were only dead in the area between the two towers.

A person claiming to be an industry expert on YouTube corrected the person filming, saying the tower was a 4G tower “with 5G capabilities,” and explaining what may have caused the unexplained bee deaths, adding that “This bee killing phenomenon has been talked about for years inside the industry.”

“All tower climbers can attest to bees getting “drunk” on rf [radio frequency] signal coming from the towers, which act as a lure,” the YouTube user, Tyler Vanover, wrote.

“Heavily concentrated 4g activity like the site featured in this video, can aggregate a lot of frequency, and since it’s so low to the ground, it becomes quite dangerous for low flying insects.”

“Blame California city regulations for these “hidden” low height cell structures. We build them up high and away from people for a reason,” he added.

Last month, hundreds of EMF scientists from around the world called on the United Nations and the World Health Organization to warn the public of health risks associated with the 5G rollout, including, “cancer risks,” “genetic damages,” “functional changes of the reproductive system,” and “neurological disorders.”

“Damage goes well beyond the human race, as there is growing evidence of harmful effects to both plant and animal life,” they wrote.