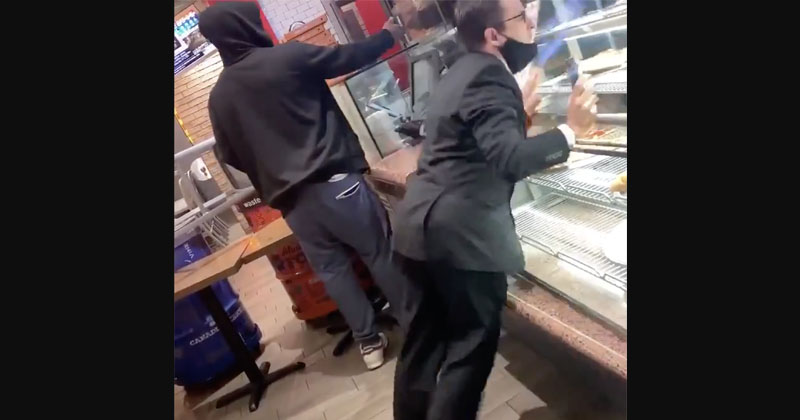 A video showing a Toronto man flipping out over a pizza shop patron without a facemask has gone viral, with internet observers noting that the individual in question was not even wearing his own face covering properly.

In the clip, a furious man approaches an unmasked customer waiting for his food at a ‘Pizza Pizza’ chain restaurant. After being pushed away, the self-declared mask enforcer screams, “What the f**k! You assaulted me! Call 9-11!” He then proceeds to smash a glass display containing pizzas with his bare hand, before pushing it off the counter. The display can be heard shattering as it hits the ground.

A Toronto man destroyed a pizza display because another customer was not wearing a mask 😱-📹 u/RxdditRoamxr #Toronto #COVIDIOT #COVID19Ontario pic.twitter.com/4ks86Lbh35

The customer without a mask then quietly takes his food and leaves, prompting the display-smashing man to yell: “Do not give him his food!” and “You shouldn’t have done that! He assaulted me!”

The bizarre incident is made even more puzzling by the fact that the mask vigilante appears to have been wearing his own mask under his chin. Internet users basked in the irony of the situation.

“Yet he’s wearing his as basically a chinstrap?! If it doesn’t cover your mouth and nose, the only thing it’s preventing the spread of is your barnyard breath!” joked one Reddit user.

Many comments speculated that the violent outburst could be the result of mental health issues.

I think some ppl are borderline psychotic and the stress of Covid19 puts them over the edge.

Toronto requires masks to be worn in all indoor public spaces. Similar policies adopted by the British and German authorities have sparked protests in those countries. In the Netherlands, the government has said it will not advise the public to wear face masks, arguing that there is not enough proof that they are effective at stopping the spread of Covid-19.

If “individual health” doesn’t matter and is destroyed by “public health”, is there any such thing as “health”? Richard Proctor, BathroomEconomics.com, on his personal experience with masks.