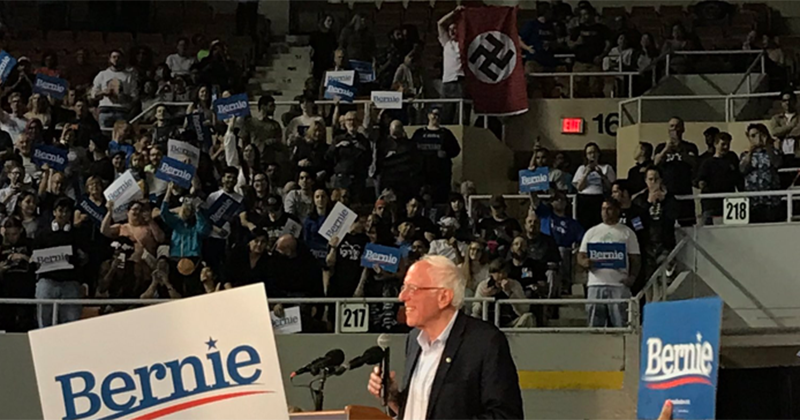 A protester unveiled a Nazi flag at Sen. Bernie Sanders’ (I-VT) Thursday rally in Phoenix, Arizona, leading to his removal from the venue.

Cheers turned to boos at the Arizona Veterans Memorial Coliseum on Thursday after a protester unveiled a Nazi flag to the crowd, waving in the air as Sanders, who is Jewish and lost family members in the Holocaust, stood on stage.

Those nearby reportedly snatched the flag from the man, and he was ultimately escorted out of the venue.

Sanders reportedly did not know the man was holding a flag embellished with a swastika and simply said, “Whoever it was, I think they’re a little outnumbered tonight,” as the man was taken out of the room:

“The senator is aware of the flag with the swastika on it and is disturbed by it,” Sanders spokesman @cascamike says. The protester was behind Sanders while he was speaking, but aides told him about it afterward. https://t.co/MVmmdJCr2z

“It was absolutely wild,” national Sanders campaign surrogate Brianna Westbrook told the Washington Post. “I never thought I would have seen a swastika at a political event. It’s gross.”

As a court stops Tulsi’s lawsuit against Google for stopping her ads after the first debate had everyone searching for his information, Google steps up censorship, censoring Trump & Bernie. Who created this technocracy and why…