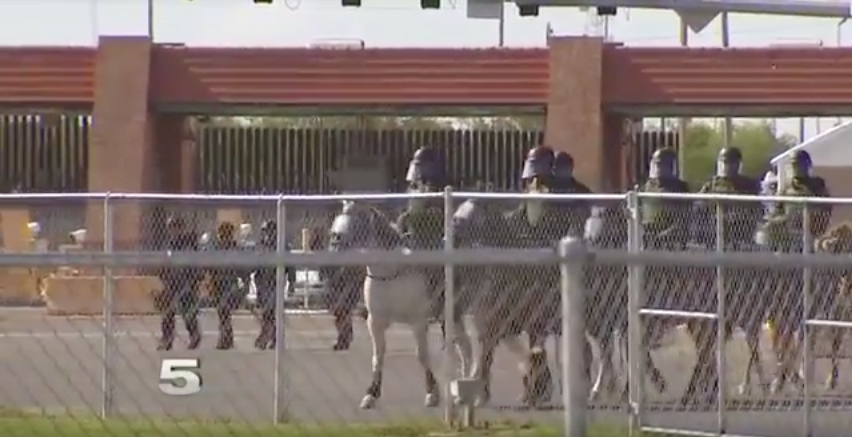 Federal immigration enforcement agents and US Army soldiers were witnessed Monday carrying out training exercises at a US-Mexico port of entry in anticipation of the migrant caravan’s arrival.

Footage from the McAllen-Hidalgo International Bridge in South Texas shows Customs and Border Protection agents outfitted in SWAT gear, helmets and riot shields training alongside soldiers dispatched to the border as part of Operation Faithful Patriot.

Soldiers and CBP also circled the area in helicopters, while some agents were seen on horseback. Military vehicles apparently outfitted with LRAD sound cannons were also on the scene.

The exercises reportedly caused a 50-minute delay for traffic traveling into the US from Mexico.

Speaking to ABC affiliate KRGV, Border Patrol representatives confirmed the training was in response to the caravan, currently in Mexico City, but expected to approach one of the Rio Grande Valley’s numerous ports of entry.

“We know CBP is making their presence known. We know in a statement they tell us they are preparing for that caravan which may be coming to our border,” KRGV’s Angelo Vargas reported.

Over the weekend soldiers also fortified areas below the US McAllen-Hidalgo International Bridge with concertina wire, where previously there had been none.

Compare the latest efforts to secure the border with a photo taken by Infowars while at another McAllen port of entry in 2014. The photo clearly shows the area bordering Mexico along the Rio Grande River lacks any type of deterrent discouraging illegal entries.

President Trump acknowledged the “beautiful” barbed wire in a campaign rally speech in Montana on Sunday, saying, “…I noticed all that beautiful barbed wire going up today. It was some — barbed wire used properly can be a beautiful sight.”