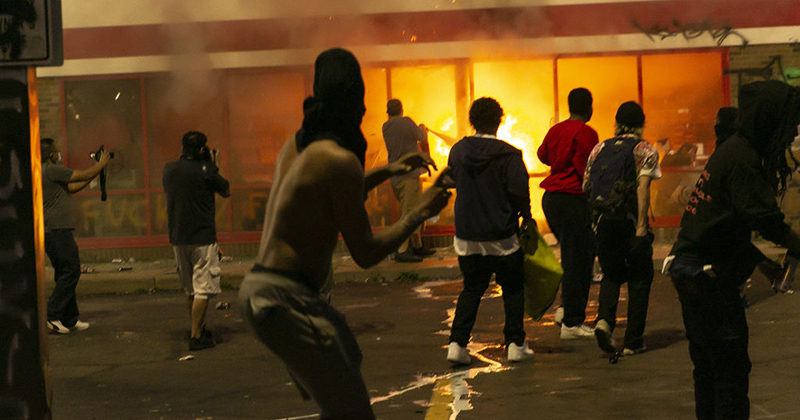 The crowd, which primarily consists of young black protestors but includes some white men, can be seen throwing objects at the outside of the Target, and manhandling vending machines in an unsuccessful attempt to tip them over.

Other rioters can be seen scuttling away from the entrance and into the parking lot with shopping carts and arms heavily laden with consumer electronics and household wares. One woman appears to be trying to maneuver a large floor rug across the sidewalk.

Several looters bend down to eagerly scoop up soda cans from the destroyed vending machine, in what some on social media described as a powerful display of resistance against injustice.

This is awful out here. No police. Looting continues pic.twitter.com/087TpNWhPV

The video was posted to Twitter by FOX9’s Karen Scullin with the caption, “This is awful out here. No police. Looting continues.”

Another video gives a closer look at the klepocratic protesters’ activities in the struggle against racial injustice. Several looters load multiple top-of-the-line widescreen televisions onto a pallet jack while another walks pasts holding a vacuum cleaner.

Target is getting cleaned out pic.twitter.com/0OGSHY132k

Twitter users were quick to point out the irony of justice-concerned activists using the riots as an opportunity to score free home goods.

Stealing TVs to fight police brutality.. can someone explain how this helps the cause for me?

It doesn’t help, it just continues to fuel stereotypes and public perceptions of these people. They hurt themselves behaving like this

“Protests” in Minneapolis have continued to spiral out of control following the alleged negligent homicide of an unarmed man at the hands of police, which has since been cast by officials and social media personalities as a race incident.