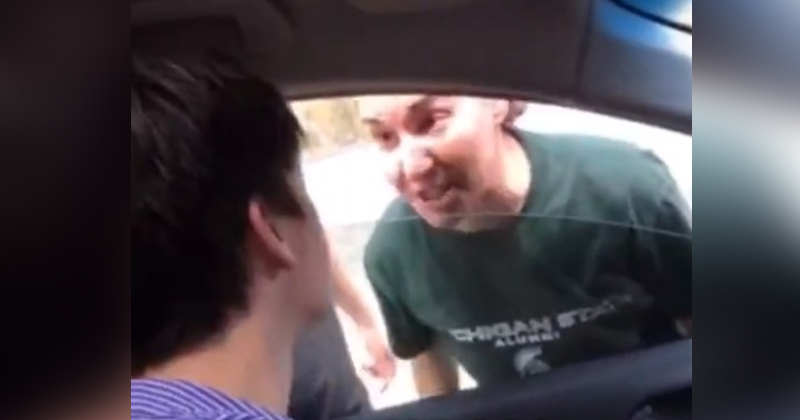 A viral video shows a lady getting into a teenager’s face – despite all the “social distancing” hype – because he’s apparently breaking a “shelter-in-place” quarantine.

i present to you karen: quarantine edition pic.twitter.com/wTurnwqwry

It’s not certain where the video was taken, but given that the lady is wearing a Michigan State alumni t-shirt with a tract home behind her, it’s probably a Midwestern suburb.

“You’re supposed to be ‘shelter-in-place’ – go ahead, put me on social media, you’re a little punk,” she tells the passenger, presumably also a teenager, who’s filming the confrontation. “And seriously, I called the cops, I can’t wait…”

It’s almost as if she’s using the confrontation to enjoy a power trip more so than to actually enforce ‘social distancing’ guidelines considering that she’s basically broken all the rules regarding that by getting into the teenager’s face.

What’s more, the confrontation runs contrary to the notion that, during a crisis, you’re supposed to rely on your neighbors more instead of calling the cops and getting into confrontations with them.

It’s been said that’s why people tend to be friendlier in rural areas because they’re more dependent on their neighbors.

Unfortunately, this video brings to mind that many suburbanite Americans who seem to obey authority without question will simply fall into a herd mentality during government-fueled hysteria rather than questioning the system at times and protecting their rights when appropriate.

Notice how the media has spent several years hyping up the phrase ‘shelter-in-place’ during mass shootings to the point where the public has now been conditioned into ‘sheltering-in-place’ in a situation that’s not a mass shooting but rather a government-imposed lockdown.

That’s not to say you should carelessly go out and spread a virus without a care in the world like many spring breakers apparently did, but you have to draw the line somewhere when mandatory lockdowns start to violate your inalienable rights, such as buying a firearm to protect yourself.

And as a side note, the video also serves as a good reminder as to why people should generally avoid buying houses in HOA neighborhoods.

A Spanish listener calls into American Countdown with Robert Barnes to talk about the travel papers he must carry and show just to go to the store.