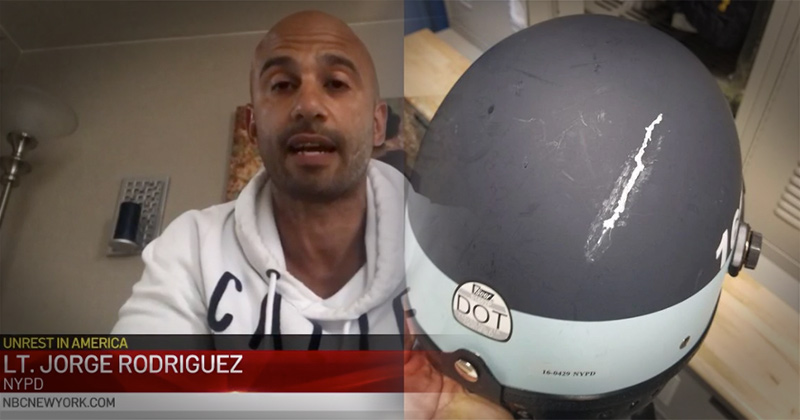 Viral footage posted online shows an NYPD lieutenant being struck in the back of the head with a brick thrown by a violent rioter.

After the lieutenant was attacked, and the helmet he was wearing likely saved his life, another officer pulled out his handgun to back the crowd up as his colleague got back on his feet.

NYC Mayor Bill de Blasio called for the officer who pulled his gun to be fired, but the police union says the mayor rushed to judgement.

The incident took place around 10 p.m. on Sunday, near East 12th Street and Broadway.

A partial clip of the melee with over 2 million views on Twitter shows the officer pointing his gun without context.

A source shared this video, which he says he took at around 10 pm near near 12th and Broadway. It appears to show an NYPD officer pointing a gun at protesters outside the Strand pic.twitter.com/pCTNIYL7op

In the full video, it’s clear the lieutenant, identified as Jorge Rodriguez, was hit in the back of the head with a brick and that the officer who pulled the gun was under the threat of a violent attack.

Now we have the full story: this police officer unholstered his weapon only after his supervisor was nearly killed with a brick. #FactsMatter pic.twitter.com/6PzqgI991I

Talking with the Daily News, the head of the NYPD’s Lieutenant’s Benevolent Association, Lou Turco, said, “If he wasn’t wearing a helmet, he’d be dead or paralyzed. He’s very lucky. The guy came up behind him and threw it at his head on purpose.”

”There was an intent to do serious damage,” he continued. “You don’t do that. You throw it from behind … from a distance, that’s reckless endangerment. You walk up to someone like that? That’s another level.”

Turco said the lieutenant suffered a concussion and is now home after receiving a CAT scan.

The image below shows the mark left on the helmet: 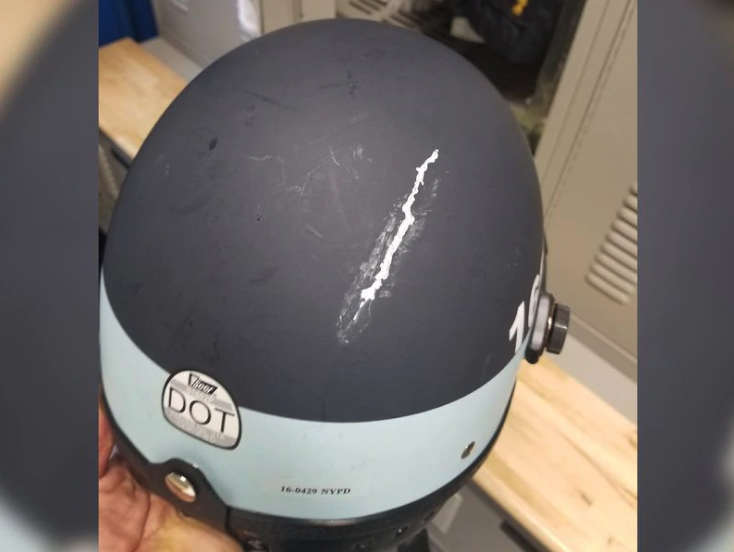 Turco also called out NYC Mayor Bill de Blasio and other local leaders who are critical of the police, saying, “I invite these politicians to show me how to properly respond and deescalate being hit in the face with a brick/brass knuckles/fists/water bottles and then apprehend and control a violently resisting criminal while other rioters are clawing at the police officer to assist in the criminal’s escape. Please show me how to inject civility into these situations.”

Lieutenant Rodriguez spoke with NBC 4 New York, “It felt like I got shot. That’s how hard and vicious it felt.”

“This was a riot and we were fighting for our lives. They were throwing rocks, bottles, vacuum cleaners. They threw a moped at us,” he explained.

“I am still dazed. I have headaches that haven’t gone away,” Rodriguez continued. “I was shaking. I almost stopped breathing. I just broke down because I saw my life end in front of me.”