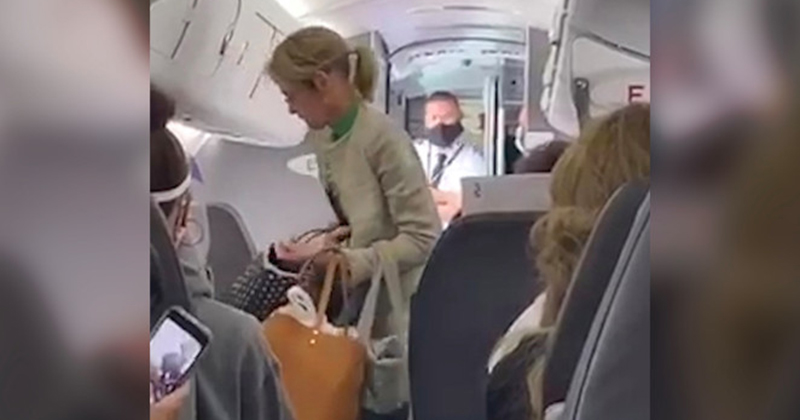 The mindset of people when it comes to face mask submission was on full display this past weekend when passengers on an American Airlines flight encouraged staff to kick off a woman who refused to accept the mask mandate, then celebrated when she was forced to leave the aircraft.

Video of the incident went viral, with commenters dubbing the woman a ‘Karen’ (?) for refusing to wear a mask and raising the ire of those on board the flight from Ohio to North Carolina.

The video shows the woman struggling to get her things together from overhead storage, when one passenger shouts “Just leave!”

As she leaves the plane, cheering and applause breaks out.

“You can clap all you want!” the woman is heard responding.

Reports indicate that before boarding the flight, other passengers complained that the unnamed woman was not wearing a mask, and demanded that she put one on.

The masked mob is going from crazy to violent — precisely what Dr. Gates & Dr. Fauci ordered

The video is just one of many recent examples of the herd keeping the sheep in line when it comes to face masks.

Another video emerged over the weekend of a couple having lunch at a dog park on the receiving end of pepper spray after an irate woman noticed they weren’t wearing face masks while they were eating their food.

This is just another example of the rise of the “mask nazis” who go to extreme lengths to enforce a medically-ambiguous mask measure.

A recent poll commissioned by Politico found that 72 percent of voters support a mask mandate in their respective states punishable by fines or jail time.

The poll also revealed that Democrats are almost twice as likely as GOP voters to “strongly support” a mask mandate by 71 percent to Republicans’ 36 percent.

The friction being caused between mask advocates and those who resist has prompted Walmart, CVS, Walgreens, Home Depot, Lowe’s and others  to reverse their policies and allow customers without masks to shop at their stores.