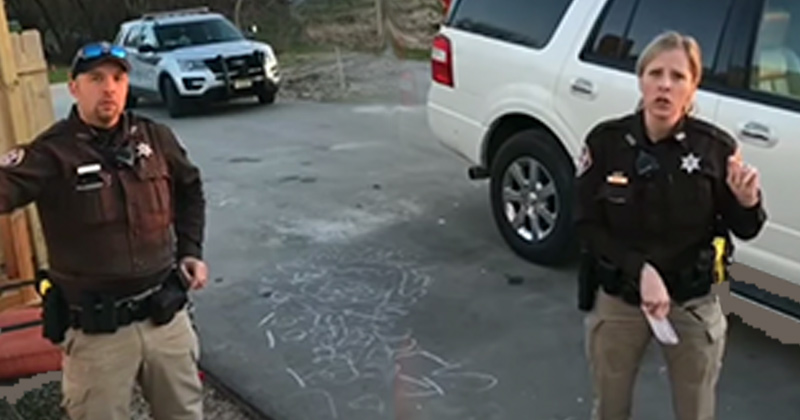 Footage posted to Facebook on Sunday shows a pair of Wisconsin police officers outside a woman’s home because she “violated a state order” by allowing her daughter to play at a neighbor’s house.

The video begins with Calumet County Sheriff’s Deputy Matthew Eberhardt sarcastically asking the mother if she’s aware that the state is under a “stay-at-home” order.

After telling the officers she is aware of the order, the mother asked why they are at her house.

Next, the female officer on the scene asked for the mother’s last name and middle initial so she could file paperwork for the alleged “violation of a state order.”

Continuing, the female officer scolded the mom for letting her child walk in her own neighborhood, saying, “She walks all over the place all day long barefoot… She shouldn’t be anywhere away from the house.”

The police woman documented that the mother “was uncooperative” and added “We’ll be back if your daughter’s out!”

Caught On Video: A pair of Wisconsin police officers on a crazed power trip show up at a woman’s home because she “violated a state order” by allowing her daughter to play at a neighbor’s house pic.twitter.com/JTtogvoE1X