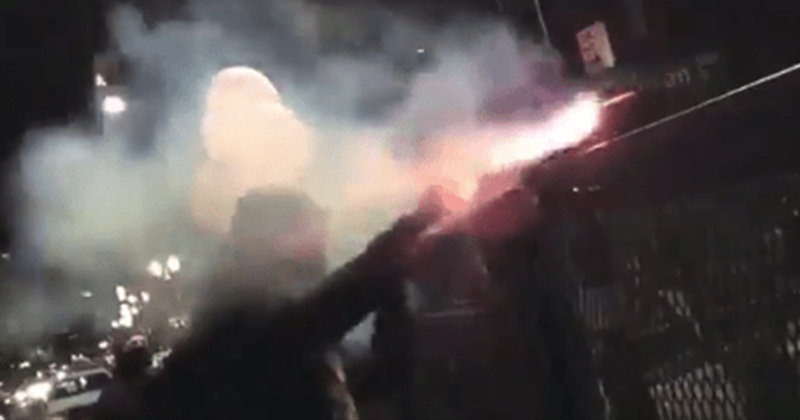 A Portland rioter burned his hand when a rocket misfired as he attempted to fire an explosive device at a courthouse, as Portland is rocked by unabated violence since the in-custody killing of suspected fraudster George Floyd by police in Minneapolis.

In the short clip from the event, the rioter lights the small rocket before reaching over a protective fence and aiming the device at the building. The rocket fails to take off, screeches, and backfires on the rioter who recoils while quickly jerking his hand out of the way.

Rioter tries to aim rocket at the Portland federal courthouse but it misfires on him, burning his hand. Video by @livesmattershow. #PortlandRiots #antifa pic.twitter.com/XskvfH2S6n

Social media found humor in the misstep, questioning the knowledge of the rioters before utilizing the devices.

“Wtf? It didn’t misfire that’s what those rockets do. Did he think rockets are conveniently designed for rioters so they put a stick on them to hold while it flies off?” asked one person.

wtf? It didn't misfire that's what those rockets do. Did he think rockets are conveniently designed for rioters so they put a stick on them to hold while it flies off?

Earlier this week, a Portland rioter made headlines after he was doxed by his Trump-supporting grandmother, who left a review on a product website for a fake plateholder the young rioter used for protesting, after he was seen firing an explosive device at a federal courthouse.

Internet sleuths came together to identify the alleged delinquent from the Oregon city which has been the center of controversial protests and claims of government overreach with arrested protesters bundled into unmarked cars by law enforcement for alleged federal crimes being subject of social media outcries.

In an age of increased surveillance, a shirtless rioter was caught in a suspected arson attack by a distinct tattoo of his unusual surname, and is now facing a lengthy jail term.

Edward Thomas Schinzing, 32, faces up to 20 years in federal prison after taking part in an arson attack to the Portland Justice Center. He was given away by his self identifying tattoo.

Schinzing has been charged with arson in a federal court following his actions in setting fire to the Portland Justice Center on May 29 at the beginning of Portland’s ongoing months of civil unrest triggered by the in-custody killing of suspected fraudster George Floyd.

Although he is accused of setting fire to a county building, the federal charge alleges he maliciously damaged a building that receives ample federal funding–adding to his pre-existing convictions and probation.

If found guilty, Schinzing will face a minimum sentence of five years behind bars. He could face up to 20. At the time of the incident, the suspect was on probation for battering his girlfriend in front of her 8-year-old son.

A woman accused of setting a cop car aflame was collared as she wore a unique t-shirt that read “keep the immigrants, deport the racists.”

President Trump has publicly condemned the unrest in the Oregon city. Democrat Jerry Nadler openly denied the violence in Portland earlier this week in an unofficial interview in DC.