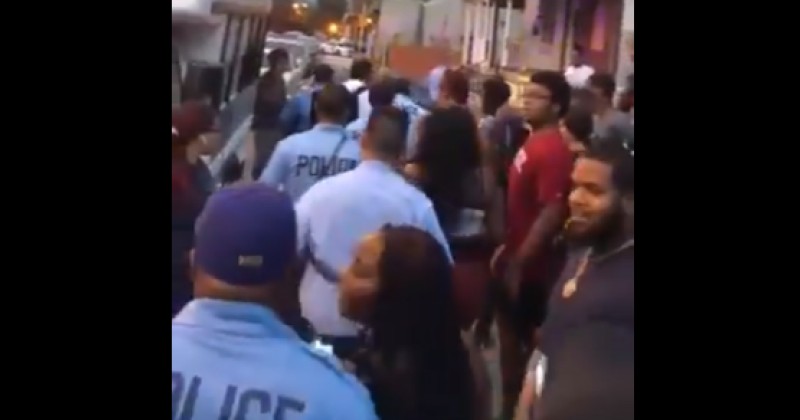 After a wild standoff and shootout that left six cops wounded in Philadelphia, residents pelted objects and shouted obscenities at some of the officers involved.

Video footage shows officers leaving the scene of the shootout, only to be physically confronted, laughed at and verbally abused by onlookers.

Bear in mind that the suspect, 36-year-old Maurice Hill, had a lengthy history of gun convictions, was being served a warrant related to a drug offense and could easily have killed some of the cops involved.

The officers were heckled and laughed at as they walked through the crowd, with one woman pushing a cop and calling him a “bitch ass ni**a.”

Yelling, screaming, and throwing things at officers that have PROTECTED YOU for 4 hours during an active shooting? Classy. WTH is wrong with you? #Philadelphia #Philly #phillypd #philadephiapd #philadelphiapolice #phillyshooter #phillyshooting @FoxNews pic.twitter.com/rUBmb65O9x

Some residents even tried to physically confront and scuffle with the officers.

According to Philadelphia’s KYW-TV reporter Alexandria Hoff, the harassment also took place during exchange of gunfire with the suspect.

“I mentioned this at 10 and since I was harassed during that live shot, I’ll mention it here, too,” Hoff said on Twitter. “A major moment of disappointment this evening was watching a crowd of people taunt police officers, laughing and yelling at them in the midst of the gunfire.”

I mentioned this at 10 and since I was harassed during that live shot, I’ll mention it here too. A major moment of disappointment this evening was watching a crowd of people taunt police officers, laughing and yelling at them in the midst of the gunfire. #PhiladelphiaShooting

After more than five hours of gunfire, a SWAT team managed to get two officers and three hostages out of the building which Hill was holed up safely.