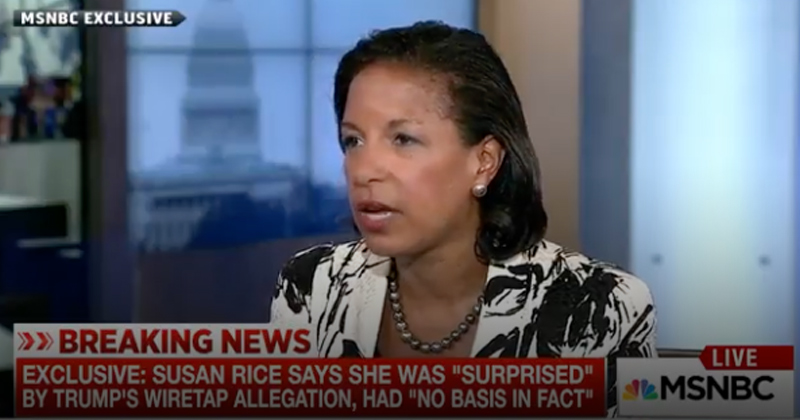 Susan Rice, the former National Security Advisor under President Obama, seemed uncomfortable when asked if she would be willing to testify before Congress about her role in “unmasking” the Trump team from recorded surveillance.

“Rand Paul is suggesting that you be subpoenaed to testify. Would you be willing to go to Capitol Hill?” MSNBC host Andrea Mitchell asked on Tuesday.

Rice squirmed a little before responding.

“You know, Andrea, let’s, let’s… see what comes. Umm, I’m not going, ahh, you know, sit here and prejudge, but what I will say is that the investigations that are underway as to the Russian involvement in our electoral process are very important and they’re very serious,” she said while stuttering a bit. “Every American ought to have an interest in those investigations going wherever the evidence indicates they should.”

And as Infowars reported earlier, a body language expert said Rice was clearly being deceptive during a related PBS interview when she claimed to have no knowledge of the surveillance.

While serving as National Security Advisor, Rice wanted to “unmask” the identities of Trump’s transition team officials whose conversations with foreign officials were “incidentally” collected by US intelligence, according to a bombshell report by citizen-journalist Mike Cernovich.

“The White House Counsel’s office identified Rice as the person responsible for the unmasking after examining Rice’s document log requests,” he reported. “The reports Rice requested to see are kept under tightly-controlled conditions. Each person must log her name before being granted access to them.”

Typically the names of American citizens in contact with targeted foreign officials are blacked out in intelligence reports if they’re not subject to the related surveillance warrants, not to mention other legal reasons based on Fourth Amendment protections.

As such, the “unmasking” of Trump officials was politically-motivated, and former President Obama made policy changes throughout his presidency to turn “incidental collection” into de facto surveillance of U.S. citizens without valid warrants.