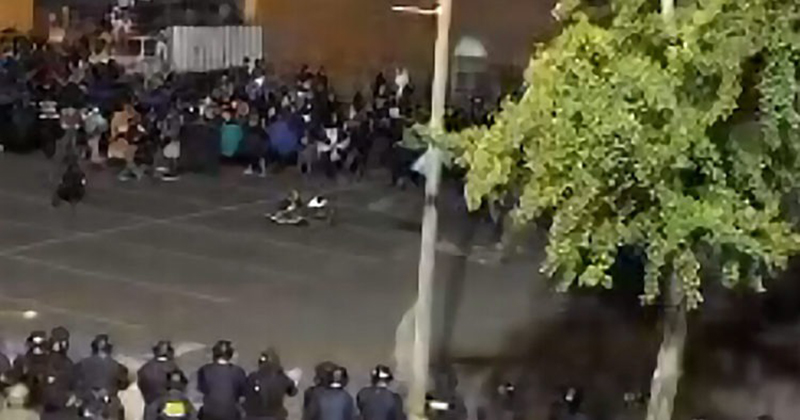 The mayor of Richmond, Virginia blamed “white supremacists” after mayhem broke out again in the city over the weekend, as mobs composed of Black Lives Matter and Antifa-linked rioters attempted to storm police headquarters, leaving a “path of destruction” in their wake as part of a planned violent “protest” titled “Richmond Stands With Portland.”

“No bad protesters. No good cops. Come prepared, wear a mask, bring water” and “Do what you want, f*ck sh*t up,” the organizers instructed prospective attendees.

After meeting at Monroe Park, the mob began moving toward police headquarters, just under a mile from the park. Storefront windows were shattered while a municipal dump truck and Chipotle Mexican Grill were set on fire, with police declaring the event an unlawful assembly around 11:00 p.m.

The Deep State Democrats accuse Trump of planning a Civil War to retain power after his projected defeat in the upcoming November election.

According to reports from officials at Virginia Commonwealth University, the rioters racked up more than $100,000 worth of damages as they passed through the school’s downtown Richmond campus alone.

According to law enforcement, rioters attacked officers with firecrackers, and by hurling bricks, chunks of pavement, batteries, and other objects into police formations.

“Protestors have tore down police tape & have pushed forward with w/lasers & firecrackers,” reported the Twitter account of the Virginia State Police, whose officers were on hand to assist in defending Richmond’s police headquarters.

After the dust settled on Monday, police say only six rioters were arrested by police. Four of those arrested were from Richmond, with the remaining two from the Virginia cities of Hampton and Colonial Heights respectively.

At a Sunday afternoon press conference, Richmond Mayor Levar Stoney and Chief of Police Gerald Smith attempted to deflect blame for the riot on to “white supremacists” who they claim infiltrated the left-wing mob in an attempt to incite violence.

“White supremacists were marching under the banner of Black Lives Matter,” claimed Smith, asserting that the previous 20 or more days of protesting and rioting did not include white supremacists.

“I would like to give a thanks to Black Lives Matter. It was not them,” Smith told members of the press.

“There were white supremacists marching under the banner of Black Lives Matter, attempting to undermine an otherwise overwhelmingly peaceful movement.”

Stoney recently ordered a series of Confederate statues be removed from the capital city, claiming that their presence now posed a threat to “public safety,” as mobs of rioters and vandals were likely to topple them.