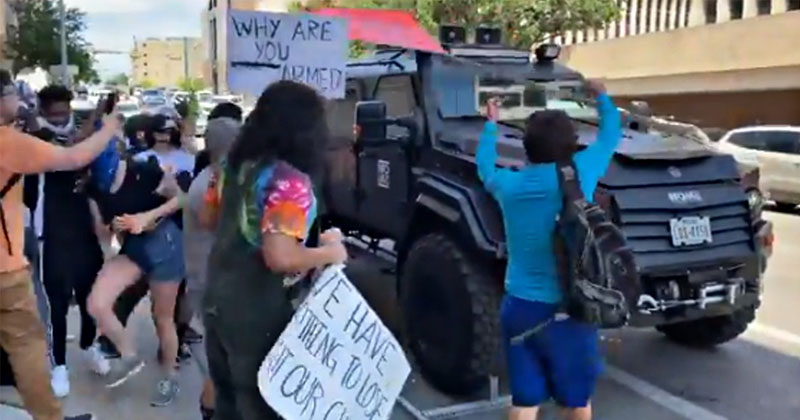 During the George Floyd protests that have now spread across the country, rioters in Austin, Texas attempted to attack an Infowars armored vehicle, known online as the Infowars Battle Tank.

Swarming the vehicle while War Room host Owen Shroyer was inside, rioters attempted to use hammers to smash windows, lights, and remove the bullhorn from the top of the vehicle.

At one point in the video, it appears that a bike rack was placed underneath the video to stop its progress. The vehicle continued moving despite the road block. At another point, someone throws a metal object at the vehicle’s windshield.

In another moment captured on video, rioters attempted to break the bullhorn mounted to the vehicle by both prying it off with bare hands and by attempting to pull it off using a Black Lives Matter banner.

While cosmetic damage and splintered glass were sustained, rioters were ultimately unsuccessful in damaging the vehicle.

In another video uploaded by Hernandez, she notes that protesters were caught chanting “F**k the police,” and that one protester was arrested.

Chants of “Fuck the Police”. One protester arrested pic.twitter.com/YdWbuWgNJJ

Providing continuing coverage of the protests in Austin, as they continued to turn violent, Hernandez wrote that she believes those committing the violence were not natives of Austin.

“People who are not from Austin are currently in our city tagging buildings, furthering civil unrest,” wrote Hernandez.

“Easy to come into a city that isn’t your home and destroy it. My heart goes out to all of the local businesses and homes that will be targeted tonight.”

People who are not from Austin are currently in our city tagging buildings, furthering civil unrest.

Easy to come into a city that isn't your home and destroy it. My heart goes out to all of the local businesses and homes that will be targeted tonight.

National File will continue to provide coverage as the protests and riots that were sparked after the death of George Floyd spread across the country.