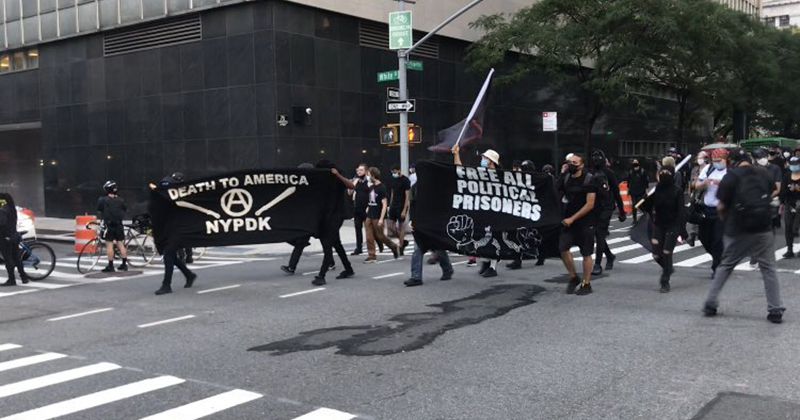 Members of the extreme-left Revolutionary Abolitionist Movement carried banners reading “Death to America” and “Free All Political Prisoners” during a New York City street protest Friday, before smashing windows and igniting a dumpster fire as police declared the event an unlawful assembly.

Clothed in “black bloc” gear to conceal their identities, members of the group chanted “every city, every town, burn the precinct to the ground,” with some pumping their fists as others waved black flags complete with the red star of communism.

Chants of “every city, every town, burn the precinct to the ground” pic.twitter.com/RXX9vHCDLX

As the demonstration dragged on, it descended into chaos, setting a similar stage to the riots that have plagued New York City and the nation for much of the summer. According to a next-morning news report, members of the riotous mob caused more than $100,000 in damage as they raged their way through the Lower Manhattan neighborhood, lighting a dumpster aflame, smashing windows, and vandalizing storefronts with graffiti. Among their victims were a Starbucks, a Duane Reed Drugstore, and several banks.

Some set their eyes on a journalist covering the event, with @eladdeliahu reporting that he was chased by a group of rioters who attempted to physically attack him. Attacks on journalists have become commonplace at left-wing riots, with camera-wielding reporters often becoming targets of the mobs. “Got accosted and chased by a few black bloc’d protesters,” he Tweeted. “They only tried to kick, punch, and shove me when I turned my back.”

As the chaos played out, police declared an unlawful assembly, arresting a total of 8 rioters, including 2 who had traveled from out of state to partake. While rioters being loaded into a transport vehicle appeared to play dumb, those left behind were quite proud of their work, posing before smashed windows for souvenir photos.

Protesters proudly posing for their friends to take pictures in front of a smash Bank of America window pic.twitter.com/w4uzLnthJ6