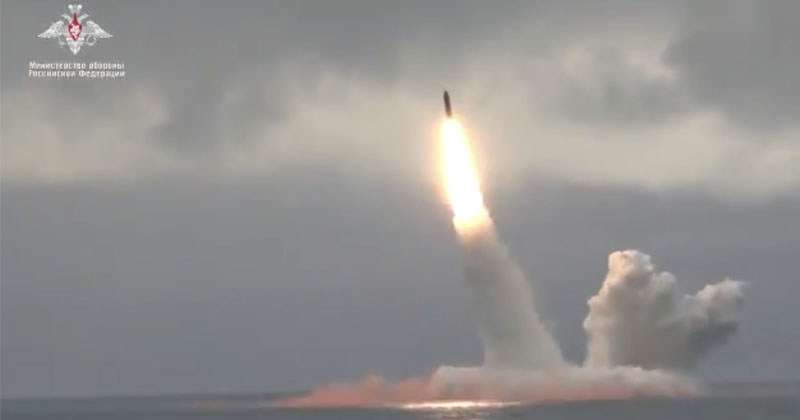 Russia’s Defense Ministry has confirmed it launched two ballistic missiles from nuclear-powered submarines in the Arctic Ocean and the Barents Sea on Saturday, just a day after Putin on Friday said he intends to respond to the prior Sunday’s first ever Pentagon test of a previously banned ground-launched cruise missile with a range of over 500km in a post-INF treaty world.

“Nuclear powered submarines Tula and Yuri Dolgoruky launch ballistic missiles Sineva and Bulava from Circumpolar region of the Arctic Ocean and the Barents Sea,” a defense ministry tweet read. Though it wasn’t a “land-based” launch explicitly banned under the now defunct Intermediate-Range Nuclear Forces Treaty (INF), the fact that it involved nuclear subs and “large-sized” missile warheads on ballistic missiles is certainly intended to send a clear message to Washington.

A separate statement called the launch “successful” and further described, “The large-sized mock-ups of missile warheads completed the full cycle of the flight program and successfully hit training targets at the Chizha range in the Arkhangelsk region and the Kura range on the Kamchatka Peninsula,” according to TASS.

The Arkhangelsk region is also where a secret hypersonic missile test recently failed. As a result of the explosion which had — according to Russian nuclear authorities included a “mini-nuclear reactor” — an unknown quantity of radiation was released into the air, prompting an emergency response and widespread speculation in western press.

In his remarks before Russia’s Security Council on Friday, Putin was scathing in his reaction to the latest US missile test as well as American Defense Secretary Mark Esper’s recent signalling of a possible missile deployment to Asia “sooner than later”. Putin said any planned Asia-Pacific region US deployment “affects our core interests as it is close to Russia’s borders”.

“All this leaves no doubts that the real intention of the United States (in exiting the INF pact) was to… untie its hands to deploy previously banned missiles in different regions of the world,” Putin said.