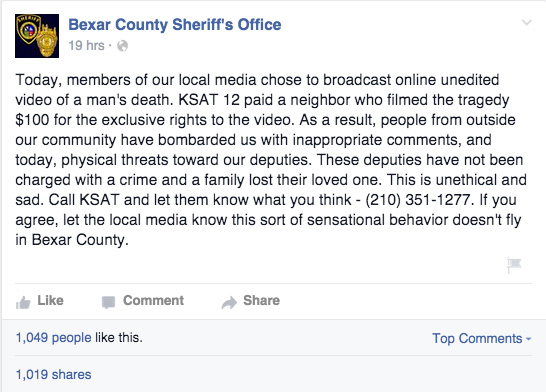 Cell phone video obtained by a local news station appears to show the moment two Texas deputies gunned down a man who held his hands up, contradicting police’s version of events.

WARNING: VIDEO MAY BE DISTURBING TO SOME VIEWERS. DISCRETION IS ADVISED.


On Friday, Bexar County sheriff’s deputies responding to a domestic violence call encountered 41-year-old Gilbert Flores on the front yard of a home outside of San Antonio.

Flores was suspected of assaulting a woman and infant inside the residence.

Police said Flores appeared to have a knife when they arrived and attempted to “resist and fight back,” according to Bexar County Sheriff’s Office PIO James Keith.

Deputies Greg Vasquez and Robert Sanchez claimed they attempted to use non-lethal force to stop Flores, including tasers and riot shields, according to Think Progress, but their efforts proved fruitless, they said, and they had to open fire on the man, killing him.

However, cell phone video filmed by a neighbor and obtained by ABC affiliate KSAT News shows a shirtless Flores putting his hands up multiple times and little if any effort by law enforcement to employ non-lethal force.

Instead, the alarming footage appears to feature one, if not both officers opening fire on Flores as his hands are raised in the air.

“Certainly what’s in the video is a cause for concern,” Bexar County Sheriff Susan Pamerleau commented on the footage Friday, “but it’s important to let the investigation go through its course so that we can assure a thorough and complete review of all that occurred.”

Currently deputies Vasquez and Sanchez, both with the sheriff’s office for longer than a decade, are on paid administrative leave. They have not yet been charged with a crime, according to the Associated Press.

Watch: Man Shot By Police With Hands Up: Enhanced Video