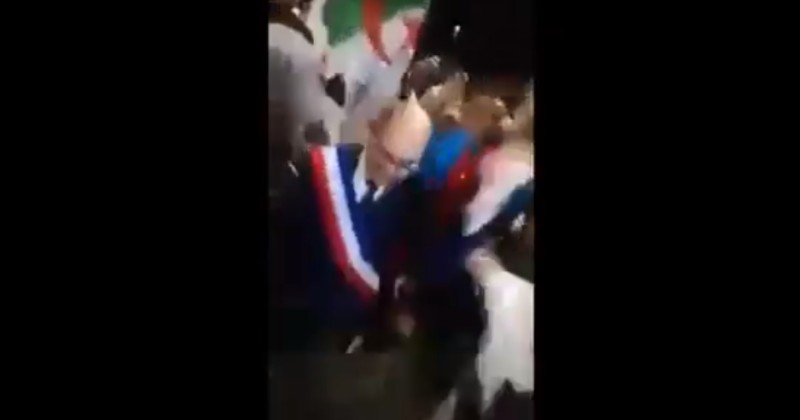 A video clip out of France shows a Socialist Mayor dancing awkwardly with a large group of Algerian soccer fans as they chant “Allahu Akbar”.

A heart-warming display of diversity, I’m sure you’ll agree.

Respondents to the clip were not too impressed given that Algerian fans have rioted in, looted and trashed major French cities twice within the last two weeks alone.

As we reported on Monday, nearly 3000 were arrested across France as fans celebrated their team’s Africa Cup of Nations semi-final win by throwing smoke bombs, projectiles, and firecrackers at police.

VIDEO: Algerian football fans and police clash in Marseille, France, after their team win the Africa Cup of Nations semi-final with a 2-1 victory over three-time champions Nigeria pic.twitter.com/q9Y3V9ZBhT

During similar riots last week, a mother and her two daughters were mown down by a vehicle in Montpellier, an incident that left the mother dead and her baby daughter in critical condition.

Algerians also poured out onto the streets following their team’s victory over Ivory Coast.

They celebrated that win by wielding chainsaws, smashing shop windows and breaking in.

#diversity is our strength, chainsaws on the #ChampsElysees in #Paris with celebrating Algerian nationals. #Algeria pic.twitter.com/3lCN0oDQO0

Quite how the Socialist Mayor thought it was a good idea to attach himself to such criminality is anyone’s guess.

Meanwhile, Breitbart reports, “A study of the election preferences of the French military and the gendarmes has revealed an increasing trend to support populist leader Marine Le Pen and her Rassemblement National (National Rally/RN).”

Gee, I wonder why.