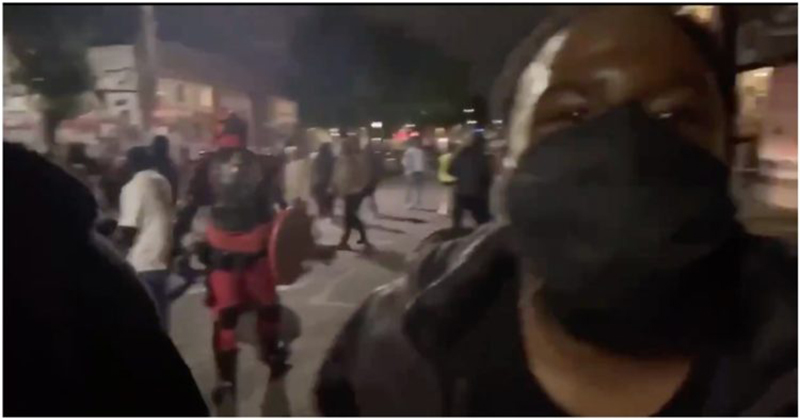 The ‘Seattle Superheroes’, a costumed vigilante team which has taken over law enforcement in the Capitol Hill Occupied Protest (CHOP), had an opportunity to take real action to fight crime after a man was killed and two others injured in a shooting within the far-left autonomous territory.

As police are banned from the CHOP, the duty of law enforcement fell to the Seattle Superheroes, a motley crew of misfits in brightly colored costumes, under the leadership of a man known only as ‘Red Ranger’.

On Saturday night, a brawl appeared to take place between drunk rival factions within the CHOP, ultimately resulting in a CHOP resident shooting an African American man dead.

This is the fight that immediately preceded the shooting in the #CHAZ/#CHOP.

Witnesses said there was heavy drinking throughout the night, then a conflict escalated into gunfire.

The autonomous zone has failed. Time to reinstate law and order.pic.twitter.com/I0kOFgQvjF

However, instead of rushing in to stop the brawl and save the day, the Seattle Superheroes appear to have been caught on video fleeing the scene the moment the going got tough.

Infowars was on scene when a group of young men drove their vehicle into a fenced off basketball court and went for a joyride in CHOP.

Footage posted by investigative journalist Jack Posobiec on Sunday clearly shows Red Ranger and his ally, ‘Justin Service’, attempting to leave the area after it began to descend into chaos.

I made a mashup of the CHAZ/CHOP Power Rangers claiming they'd keep the streets safe… then COMPLETELY AVOIDING the shooting scene. pic.twitter.com/tGSayldJXO

The footage suggests that America may not yet be ready for a phasing out of conventional police in favor of masked LARPers. In recent weeks, leading figures on the left have called for police departments across America to be defunded and/or disbanded.

However, it may well be that the Seattle Superheroes were unable to contend with real crime because of their laser focus on hunting down their nemesis, Phoenix Jones, a former member of the team who later transformed into the CHOP’s first supervillain after embracing a life of crime.

The National File previously reported on the rise of Phoenix Jones:

Investigative journalist Jack Posobiec, who has been reporting from within the CHAZ, provided an exclusive statement to the National File after talking to the Seattle Superheroes on Sunday.

“They said one of their former members named Phoenix Jones is now evil and threatening women, and that he wears black and gold armor,” Posobiec said. “I saw a guy dressed like that earlier Sunday night during the auto shop mob.”

Posobiec then turned to Red Ranger and began conversing with him.

“If you see Phoenix Jones, let us know,” said Red Ranger. “He’s the other guy who used to be a superhero and still rolls around.”

“He’s gotten into a lot of trouble, I’ll say that on camera,” Ranger concluded, before walking away

The Seattle Times reported in January that following his retirement as a superhero, Phoenix Jones, whose real name is Ben Fodor, had become a notorious drug dealer.