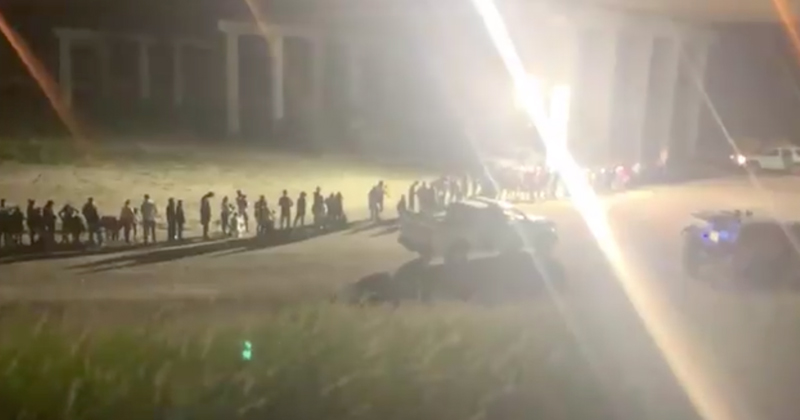 A Texas reporter in the Rio Grande Valley took her camera to Rincon Village and witnessed approximately 300 migrants crossing the border and turning themselves in to Border Patrol agents. The crossings occurred Tuesday night between 6 p.m. and midnight.

KGBT CBS4 Reporter Sydney Hernandez traveled to the Texas border at Rincon Village Wednesday night at about 6 p.m. The deserted area on the banks of the Rio Grande is a well-known border crossing area. During the next six hours, Hernandez sent out a series of tweets capturing the images of migrants walking up the dirt roads from the border river where human smugglers cross them at will. The migrants walk up to the first Border Patrol agent or other law enforcement officers they can find and turn themselves in.

The groups started out small, Hernandez told Breitbart News on Thursday. She said she witnessed 20 in the first group, 38 in the second, “then 40, then 50, then about 150.” During the six-hour stretch, the counted about 298 migrants who illegally crossed the border from Mexico.

#BORDERNEWS 9:30 PM Update. Another group has crossed up from the Rio Grande. This time near Rincon, just about a mile or two from homes. #Immigration #Texas pic.twitter.com/3REZuSyDhd

#BORDERNEWS 10:55 PM Update. We’re at Rincon Village. Very close to Mission, TX. Same area as a previous update but these are completely new people. A totally new group of 50+. As I tweet this there are more coming up to meet this group and approach Border Patrol. #Immigration pic.twitter.com/k1Gw5UaKHF

#BORDERNEWS WATCH THIS 12:00AM UPDATE The group you saw in the last update has now turned into about 150 people. One woman just had gastric bypass and will need to get checked out by EMT. More are still walking up near Rincon. Buses leaving. #Immigation #Texas #RGV #BorderReports pic.twitter.com/IUImtYPwEz

#BORDERNEWS I’m so sorry these updates are coming out a bit delayed on time due to the lack of signal out here. But this is exactly what is happening just after 12:30 AM on the border. #BorderReports #JustFacts #Immigration pic.twitter.com/BWc2wsrDQg

#BORDERNEWS FINAL UPDATE: Thanks for watching these super short informal clips of what’s happening on the Texas Mexico Border. This is what it looks like just feet from the Rio Grande while the rest of the world is sleeping. Next shift of agents just showed up. #BorderReport #RGV pic.twitter.com/xFpiWEjmA3