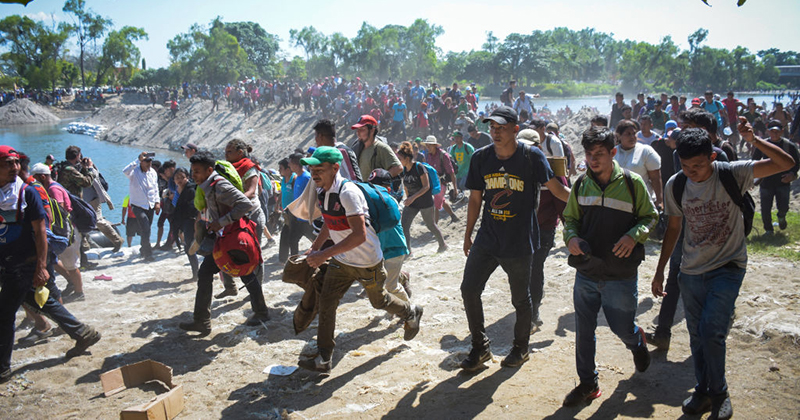 Thousands of migrants stormed a bridge over the Suchiate River from Guatemala on Monday, then took to the water to wade across when Mexican authorities refused to allow them to proceed north.

The massive caravan featured fathers with strollers hoisted on their shoulders and women carrying infants and small children through the mucky water to the north bank, where Mexican troops were waiting with tear gas and riot shields, according to The Associated Press.

“On the Mexican side, migrants ran from side to side along the river bank, kicking up dust and looking for an opening in the ranks of the National Guard troops sent to meet them,” the news service reports.

“Guardsmen scrambled too, trying to head off groups and detaining people where they could. There was pushing and shoving. Some guardsmen carried plastic riot shields hit with rocks tossed by migrants and they occasionally sipped a rock back into the crowd.”

Guardsmen toting rifles and long staffs worked to hold the line against several waves of migrants as they charged the banks screaming and lighting fireworks, tossing rocks and running in separate directions to elude capture.

The migrants were emboldened by previous caravans that have pushed through the checkpoint in recent years.

“By river, that’s the way it will be,” Edwin Chavez, a 19-year-old from Tegucigalpa, told the AP.

“There’s no fear,” he said. “We’re already used to repression. In your country they repress you, they hit you. It’s always like that.”

The rush across the river followed an unsuccessful attempt by thousands to storm the bridge to Mexico and demand free passage for all.

A migrant who refused to give his name to the AP read an open letter to Mexican President Andres Manuel Lopez Obrador from the locked gates on the bridge earlier in the day, to no avail.

“We have come peacefully to try to start a dialogue with the government, in order to reach an agreement in which all the members of the caravan will be allowed permission to freely pas through Mexican territory,” the man said.

So far, Mexican officials have keep their word to President Trump to stop the massive caravans heading north through the country in route to the United States.

Mexico sent hundreds of guardsmen and other officers to the Mexican border with Guatemala, where they’re also patrolling with drones and manning checkpoints with the help of U.S. immigration agents.

Mexican officials have bused more than 1,000 migrants willing to seek asylum in Mexico to a processing center in Tapachula, where Honduran Wilson Valladaras said many are planning to wait out their claims “until Trump leaves,” the Center for Immigration Studies’ Todd Bensman reports.

Most understand that “right now, the Americans will throw you back” to Mexico if caught crossing illegally, Vallaedaras told Bensman.

Honduran mother Katherine Cabrera also told Bensman she’ll be waiting in Mexico with her infant daughter while she roots for a Democrat to win the White House in 2020.

“I want Trump out!” she said. “I’ll wait for that because it would make things easier to get in.”

Folks farther down the line agreed.

In Guatemala, El Salvadorian mother Brenda Ramos told Bensman she’s taking a similar approach as she treks north across the river with her two-year-old daughter this week.

“A lot of people in El Salvador believe he (Trump) is the reason all this is happening, that he is selfish and cruel and doing everything he can to make us suffer,” she said. “But once Trump is defeated and the Democrats take over, things are going to get better.”