President Trump vowed Monday to allow the media to visit migrant detention centers after the New York Times published a report that claimed the conditions were squalid and disease-ridden.

“What we’re going to do is I’m going to start showing some of these detention centers to the press. I want the press to go in and see them.” Trump said.

“I just spoke to mark Morgan, and I just spoke with, as you know, Kevin, so we’re going to send people in. We’re going to have some of the press go in because they are crowded, and we’re the ones complaining about they’re crowded.” The President added.

“They’re crowding because people come up but now thanks to Mexico, it’s slowing down greatly, and I think you’ll start seeing some very good numbers.” he continued.

“But it is crowded. But we want to have the press go in and see because The New York Times, it really is fake news.” Trump concluded.

The Times report described a Border Patrol station in Clint, Texas as filled with hundreds of children wearing filthy clothing and crammed into tiny cells.

“The stench of the children’s dirty clothing was so strong it spread to the agents’ own clothing – people in town would scrunch their noses when they left work. The children cried constantly,” the article claimed.

“One girl seemed likely enough to try to kill herself that the agents made her sleep on a cot in front of them, so they could watch her as they were processing new arrivals.” it also claimed.

Trump called the article a “hoax”.

New York Rep. Alexandria Ocasio-Cortez, who visited the Clint facility, has claimed that “People (are) drinking out of toilets, officers laughing in front of members Congress.”

“They’ll be starting fairly soon, but I don’t call them raids, we’re removing people, all of these people who have come in over the years illegally,” he told reporters at the White House on Friday.

Acting Director of U.S. Citizenship and Immigration Services Ken Cuccinelli defended the plan during a Sunday appearance on CBS’s Face the Nation.

ICE is “ready to just perform their mission, which is to go and find, detain and then deport the approximately one million people who have final removal orders,” Cuccinelli said.

Acting U.S. Citizenship and Immigration Services (USCIS) Director Ken Cuccinelli says ICE agents are “ready to just perform their mission which is to go and find and detain and then deport the approximately one million people who have final removal orders” pic.twitter.com/JkUXLaO2fD 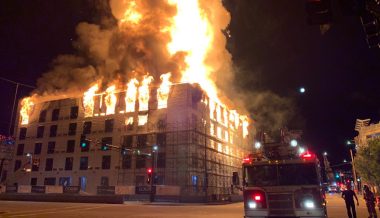