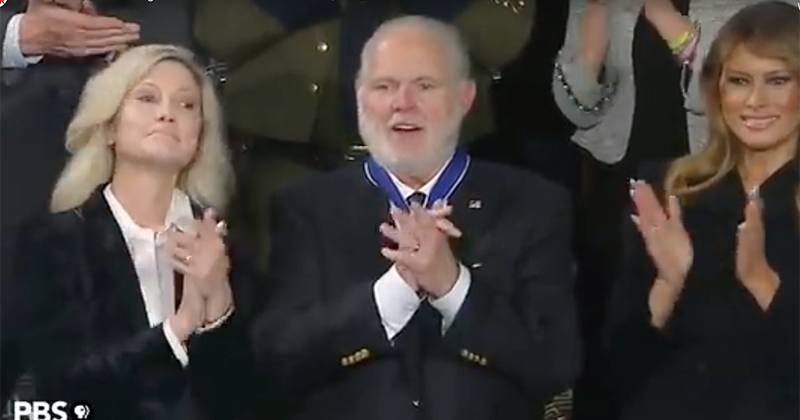 President Trump invited conservative talk radio icon Rush Limbaugh to be a guest of honor at the State of the Union Address Tuesday night, before having First Lady Melania Trump drape the Presidential Medal of Freedom around Limbaugh’s neck.

“Almost every American family knows the pain when a loved one is diagnosed with a serious illness,” President Trump said. “Here tonight is a special man, beloved by millions of Americans, who just received a Stage 4 advanced cancer diagnosis.”

“This is not good news, but what is good news is that he is the greatest fighter and winner that you will ever meet,” the President continued. “Rush Limbaugh, thank you for your decades of tireless devotion to our country.”

Limbaugh, who had arrived at the State of the Union in a wheelchair, appeared overcome with emotion at the President’s praise as he stood and clasped his hands in front of his chest, before saluting the President.

Numerous verified leftists on Twitter reacted to Rush Limbaugh’s announcement that he was suffering from “advanced lung cancer” by celebrating the news.

The talk radio legend received a standing ovation for at least half a minute before President Trump continued, “And Rush, in recognition of all that you have done for our nation, the millions of people a day that you speak to and that you inspire, and all of the incredible work that you have done for charity, I am proud to announce tonight that you will be receiving our country’s highest civilian honor, the Presidential Medal of Freedom.”

Limbaugh stood again and received another standing ovation of at least a minute, before President Trump asked the First Lady Melania Trump to present the medal.

Limbaugh turned and had the medal draped over his shoulders, to a third round of uproarious applause.

“Love you Rush!” someone called out from the audience.

Democratic members of the audience could be seen in the background sitting stoically with hands clasped in their laps, staring blankly ahead.

Limbaugh turned and gave a thumbs up to the audience, cementing the iconic moment.