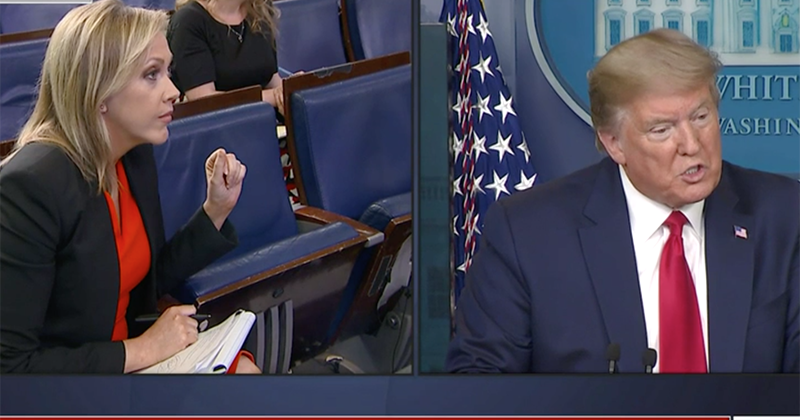 “That entire video has a gap. The entire month of February.” CBS News reporter Paula Reid urged, suggesting that the White House dragged their heels on the virus response.

“You’re so disgraceful,” Trump retorted, adding “It’s so disgraceful the way that you say that. Let me just, listen, I just went over it.”

Interrupting the President, Reid stammered “Right now, nearly 20 million people are unemployed, tens of thousands of Americans are dead, how is this rant supposed to make people feel positive in an unprecedented crisis?”

Trump said that his team had done “a lot and, in fact, we’ll give you a list,” but Reid continued to berate him.

“You know you’re a fake, you know that. Your whole network, the way you cover it is fake.” Trump hit back.

“The people are wise to you,” Trump continued. “That’s why you have a lower approval rating than you’ve ever had before, times probably three.”

Earlier on during the same briefing, Reid suggested that Trump may be forcing Dr Fauci to tow the White House line, prompting the Director of the National Institute of Allergy and Infectious Diseases to respond “Everything I do is voluntarily. Please. Don’t even imply that.”

After Dr. Fauci clarifies his remarks from Sunday about how earlier mitigation efforts would have saved lives, @PaulaReidCBS asks if he's doing so "voluntarily."

Fauci: "Everything I do is voluntarily. Please. Don't even imply that." https://t.co/9T8aUPjUrs pic.twitter.com/NHqBbOUQ77