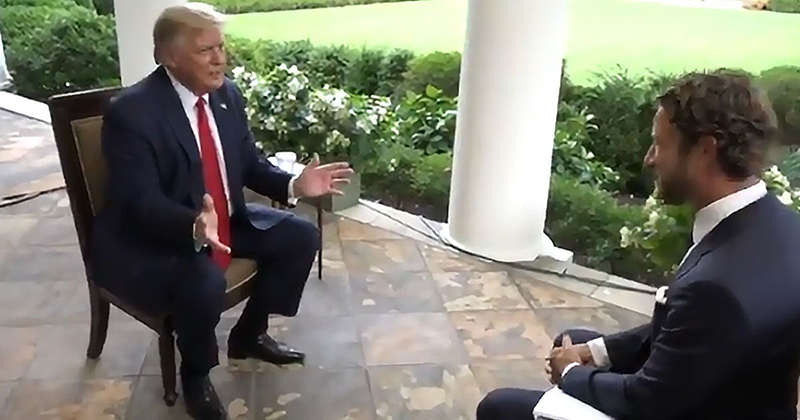 In a rare candid interview with Barstool Sports President Dan Portnoy, President Donald Trump revealed that Dr. Anthony Fauci would like to see the country “closed up” for a “couple of years,” but that he frequently overrules the doctor in his capacity as president.

While being interviewed at the White House by Portnoy, who has taken up day trading as a hobby while his sports website receives less traffic due to COVID-19 cancelling or postponing nearly all sports, President Trump revealed that he has to “overrule” Fauci to ensure the government does what is best for the American economy as well as the American people.

Portnoy began the segment by asking President Trump about Fauci’s opening pitch, which was scheduled to occur after the interview was recorded, questioning the doctor’s athleticism.

President Trump added, “We don’t always agree on everything, he would like to do things that I don’t like to do, but ultimately I make the decisions. But we make it all, a group of people, and he’s been here for like 45 years, many many years, and he’s a nice man actually.”

At this point Portnoy revealed that he is personally at odds with Fauci because of his perception that any time the doctor appears in an interview, he says that the country must remain locked down, causing Portnoy’s stocks to tank.

“I switched to the stock market actually, day trading, so Fauci’s on my X list,” said Portnoy. “Because every time he talks, he says the country should stay inside, and my stocks tank, so I don’t like that aspect of it.”

President Trump then revealed that he routinely has to “overrule” Fauci, who would like to see the country remain “shut down” for an indeterminate amount of time.

“He’d like to see it closed up for a couple of years, but that’s okay, because I’m president,” said President Trump. “So I say, ‘Well, I appreciate your opinion, now give me another opinion, somebody, please.’”

“Yeah, you have to,” said President Trump. “And, you know, we’re open, and we’re doing well. And I just did a press conference about opening the schools, you’ve got to open the schools.”