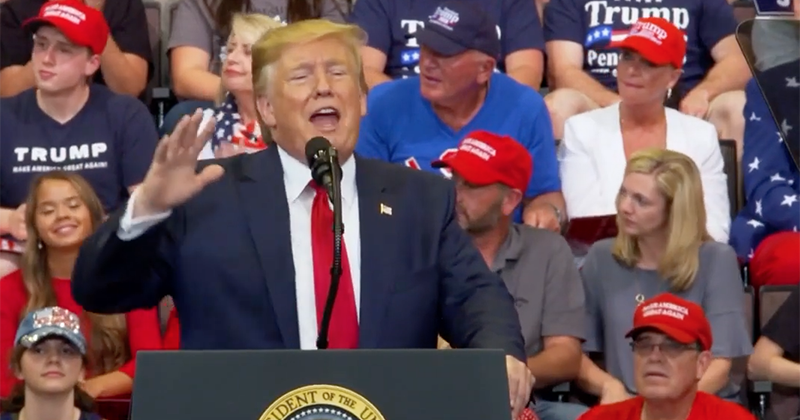 Speaking at a packed rally for supporters in Cincinnati, Ohio, President Trump slammed the so called ‘squad’ of Democrats, and “the far-left’s destructive agenda.”

“While Republicans are working every day to build up our country, the rage-filled Democrat Party is trying to tear America apart,” Trump said.

“The Democrat Party is now being led by four left-wing extremists who reject everything that we hold dear.” the President added, referring to Alexandria Ocasio-Cortez, Ayanna Pressley, Ilhan Omar and Rashida Tlaib.

The crowd applauded in agreement but did not repeat the chants of “Send her/them back” previously heard in North Carolina. Instead they chanted “USA!” and “Drain the Swamp!”

The President had said earlier in the day that “I’d prefer that they don’t” chant the ‘send her back’ taunt, but admitted that he could not stop the crowd if they chose to do so.

When Trump spoke about Hillary Clinton, the crowd also chanted ‘lock her up.’

“Do you remember when Hillary used the word ‘deplorable’?” he said. “Deplorable was not a good day for Hillary. Crooked Hillary. She is a crooked one,” he said, adding, “She is crooked.”

"Lock her up" chants after Trump brings up Hillary Clinton pic.twitter.com/zlyhmcUWEl

Trump once again raised the issue of crime infested poor neighborhoods in the inner cities, saying that Democrats are to blame.

“No one has paid a higher price for the far-left destructive agenda than Americans living in our nation’s inner cities.” Trump said.

“For decades these communities have been run exclusively by Democrat politicians and it’s been total one-party control of the inner cities.” Trump also noted.

“For 100 years it’s been one-party control, and look at them,” Trump claimed, adding “We can name one after another, but I won’t do that because I don’t want to be controversial.”

When protesters holding a banner that read “Immigrants built America” interrupted Trump’s speech and were removed, he quipped “you must have a Democrat mayor”.

Trump raised the issues of homelessness, and singled out California, saying that what the Democrats are doing there is “a disgrace to our country”.

Trump also took a shot at “Sleepy” Joe Biden, claiming that he ‘doesn’t have a clue what the hell he is doing’: