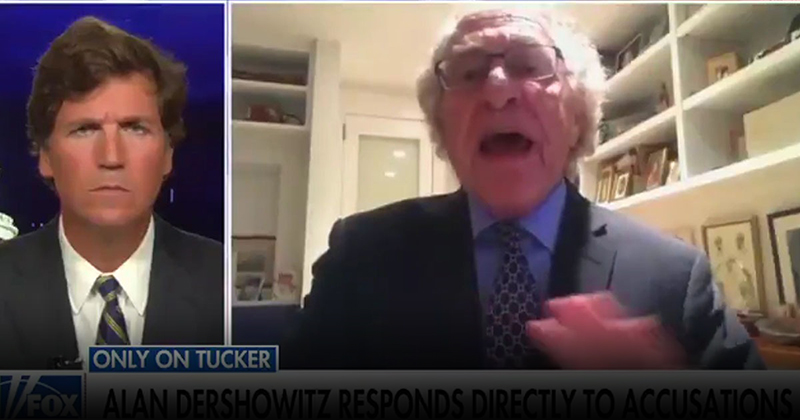 Beleaguered former Jeffrey Epstein defense attorney Alan Dershowitz appeared on the “Tucker Carlson Tonight” Fox News television program Friday night to defend himself from another round of allegations that he had sex with victims of Epstein’s underage sex trafficking harem, and negotiated a cushy deal for Epstein that exempted himself from prosecution as a co-conspirator.

Carlson opened the program by addressing the latest allegations against Dershowitz in some detail.

Why did our Govt allow him (Epstein) to sexually abuse girls? The answer lies in the people who were actually involved @BillClinton ✔@AlanDersh ✔
Bill Richardson ✔
Sen George Mitchell ✔

Equal Application of the Law ⚖

Justice must be served for these girls pic.twitter.com/UybF4WgUZK

Carlson then poked holes in Dershowitz’s claims that he had no idea of Epstein’s sex trafficking operation, despite the fact that Epstein’s behavior was common knowledge in media circles as early as 2003 and Dershowitz had stayed at the late financier’s mansion and “Pedo Island.”

Alex Jones exposes what Infowars has already told you about what to expect in the data dump of the suppressed Epstein/Maxwell documents.

Carlson also addressed the revelations that Dershowitz negotiated an agreement for Epstein that exempted “potential co-conspirators,” which within the scope of the investigation would include Prince Andrew and Dershowitz himself.

Dershowitz loudly declared that he would “waive immunity” for himself, to which Carlson replied,”I don’t think you can unilaterally do that.”

Dershowitz then vigorously defended his tenure as Epstein’s defense attorney, stating that he is “proud of it” and would negotiate the same cushy plea again if given the chance.

Dershowitz continued to deny the allegations against himself and attacking the character of his accusers, as well as claiming that Bill Clinton did not visit Pedo Island with underage prostitutes and unsuccessfully trying to convince Carlson that that were never any underage sex slaves present during any of the various trips he took to Epstein’s residences.