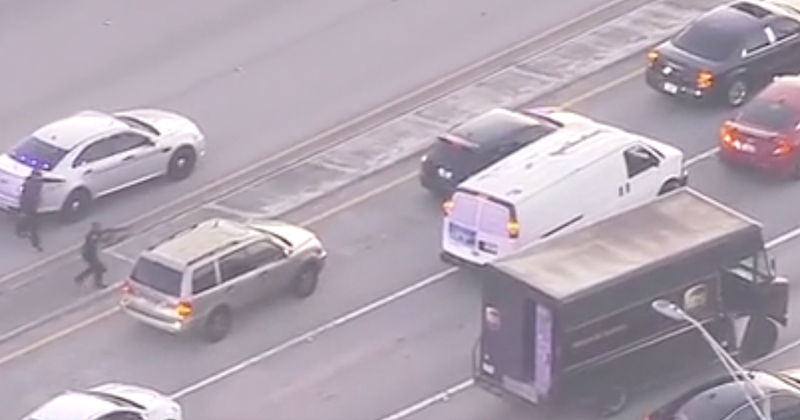 The climax of a 23-mile car chase came when the stolen UPS truck got stuck in traffic and 19 officers from 5 different agencies fired over 200 rounds into the vehicle in broad daylight.

The driver of the UPS truck, who was taken hostage, and another innocent bystander in a nearby vehicle were shot and killed by stray bullets.

Police say the criminal duo, Lamar Alexander, 41, and Ronnie Jerome Hill, 41, tried to rob Regent Jewelers in Coral Gables when an employee set off a silent alarm and the store’s owner opened fire on the robbers.

Firing back at the owner, one of the burglars struck a female employee in the head and she is now in stable condition.

The pair of bandits fled in their U-Haul van before ditching it and commandeering a UPS vehicle being driven by 27-year-old Frank Ordonez, who was taken hostage on his first day as a driver.

Watch below as police fire on the UPS truck in the midst of rush hour traffic: Warning Graphic!


When a reporter asked Special Agent Piro if it was possible that Ordonez or the other innocent civilian killed were shot by police, Piro said, “It is very, very early on in the investigation and it would be completely inappropriate to discuss that.”

However, Ordonez’s stepfather Joe Merino told Local 10 News, “They murdered him. I hope you can understand that and how I feel because it could have been prevented.”

“The negligence, the irresponsibility, the lack of life, the lack of concern,” Merino continued. “The disregard for life for the victim.”

Ordonez’s sister posted a video in remembrance of her brother where she blamed police for his death, saying, “Instead of negotiating with a hostage situation they just shot everyone.”

Today I lost my brother, because of the fucking negligence and stupidity of the police. Instead of negotiating with a hostage situation they just shot everyone. (Including my brother) please retweet this so everyone can be aware how stupid these cops are. pic.twitter.com/DyFN2ZUoAX

Frank’s brother Roy also lashed out at police on social media, writing, “I won’t stop until there is justice for your life, the police killed my brother and they must be held accountable.”

This latest post from the brother of the alleged victim who was shot and killed after a police chase. The victim I’m told is Frank Ordonez, a beloved UPS driver who was just 27 yrs old ⁦@CBSMiami⁩ pic.twitter.com/p2azkupWzq

Police maintain the criminal robbers are to blame for the death of the two innocent victims, claiming they tried to have a shootout in the middle of the busy intersection.

It’s not currently clear whether law enforcement bullets killed the hostage and the bystander or who fired the first shots, but the FBI and other agencies are investigating.