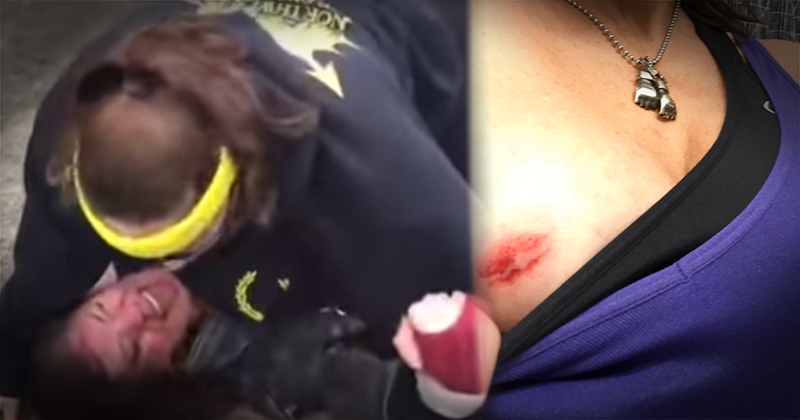 Professional MMA fighter Tara LaRosa found herself in a physical confrontation with a violent leftist who allegedly attacked another woman during a Veteran’s Day flag-waving event in Portland, Oregon.

Footage circulating on the internet shows LaRosa pinning the woman to the ground and telling her to “relax,” as the self-proclaimed professor screamed, “Stop! I can’t breathe.”

Bystanders can be heard telling the professor, “You’re going to jail,” and “Wait for the police to get here.”

“I’m like half-naked,” the woman bellowed despite wearing a long-sleeve shirt and pants.

At flag-waving rally in Portland, @TaraLaRosa says she had to take anti-Trump protester to the ground after the woman allegedly attacked another woman. The group detained the self-described professor until police came. LaRosa says the woman bit her chest, causing an open wound. pic.twitter.com/LrPJLsMIO6

Alleged photos of LaRosa’s injuries from the scuffle show her knees were scraped up and a bite mark can be seen on her breast.

.@TaraLaRosa says she was injured when the woman bit through her hoodie, shirt and bra. She has scrapes on her neck and knees as well. pic.twitter.com/k1nJCpDCdi

The beginning of the fight can be seen in a live Periscope video filmed by LaRosa, who caught one of the flag-waivers hitting the professor in the head before the screen went black as LaRosa put her phone in her pocket to break up the fight using jujitsu techniques.

Toward the end of our day, a woman came up & started berating us. She didn’t get a reaction from me so she moved on & attacked another women in our group. I had to break up a fight & put her down till the cops came. I had just started live streaming.https://t.co/hVwIgugoFh

The video doesn’t show who started the fight, so police made no arrests and instead, referred the case to the Multnomah County District Attorney’s Office.

However, it appears the woman was triggered by the Fred Perry shirts being worn by some of the demonstrators who are members of the pro-Trump group Proud Boys.

“She kept saying, ‘Fuck Proud Boys. Fuck you guys,’ over and over,” LaRosa told police, and another protester said the woman “put her hair up” and “came at” a female flag-waiver, initiating the scuffle.

Hundreds of videos over the past three years have shown anti-Trump liberals unable to control their tempers when in the presence of Trump supporters and this case appears to be yet another.