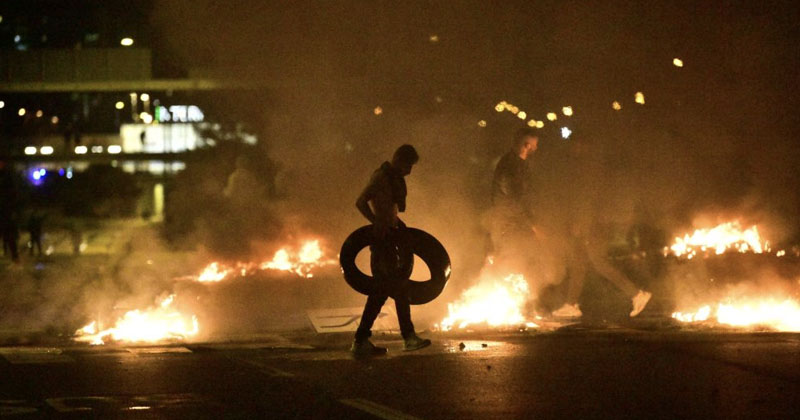 A wave of chaotic unrest broke out in Malmo, Sweden after anti-Islam activists filmed a public Koran burning, sparking protests that soon descended into riots, with unruly demonstrators setting fires and clashing with police.

Some 300 people gathered along a main thoroughfare in Malmo on Friday around 7:30pm local time to protest after members of a far-right political party staged a Koran burning earlier in the day, according to local press reports. As the crowd grew, fires were ignited in the street and several cars were torched, prompting a heavy police response that struggled to bring the situation under control.

“We have ongoing and violent riots right now that we have no control over,” police spokesman Rickard Lundqvist told a local news outlet amid the disorder.

#Breaking: Massive police and fire-fighter present in #Malmo in #Sweden, after "Stram kurs" a Danish far-right individual person burned the Quran in public on the street, and now riots and vandalism is taking place in muslim majority neighbourhoods. pic.twitter.com/aYlyNynLFi

Chants of “Allahu akbar” (“God is great” in Arabic) could be heard in footage that circulated online, which also showed tires and other debris burned in the street and a billowing column of black smoke rising into the night sky. A major fire was also reported in an underground parking garage in Rosengard, about 1km away from the main area of unrest.

Huge fires [of tires it seems] now being set in the streets of #Malmo, #Sweden after the Quran was burnt by the "Stram kurs" group. #Rosengård pic.twitter.com/MZFO2oYwZT

The Koran burning which set off the riots was carried out by members of Stram Kurs (“Hard Line”), a far-right Danish political party founded by lawyer and anti-Islam activist Rasmus Paludan in 2017. The activists filmed the burning of the holy book, which was done in a public park.

This is what sparked the unrest and riots happening right now in Malmo #Sweden.. #Stramkurs 🤯🤯🤯 pic.twitter.com/bil3CI02s1

Elsewhere in Malmo, three Stram Kurs members were reportedly arrested for incitement against an ethnic group after torching another Koran in public.

Paludan was barred from entry into Sweden earlier on Friday, turned away at a border checkpoint near Malmo and slapped with a two-year ban from the country over concerns that he could “disturb public order,” a police spokesperson told Danish broadcaster DR.

The right-wing activist had previously requested a permit to hold a demonstration in Malmo, where he was set to attend a Koran burning with street artist Dan Park, which was promptly rejected by Swedish authorities. A court argued that while “the freedom of assembly and demonstration are constitutionally protected rights,” the government may prohibit a gathering “for reasons of order and safety.”

Police brutality? Bezos has too much money? Any excuse will do for those who fled foreign countries and now want to destroy America from within.