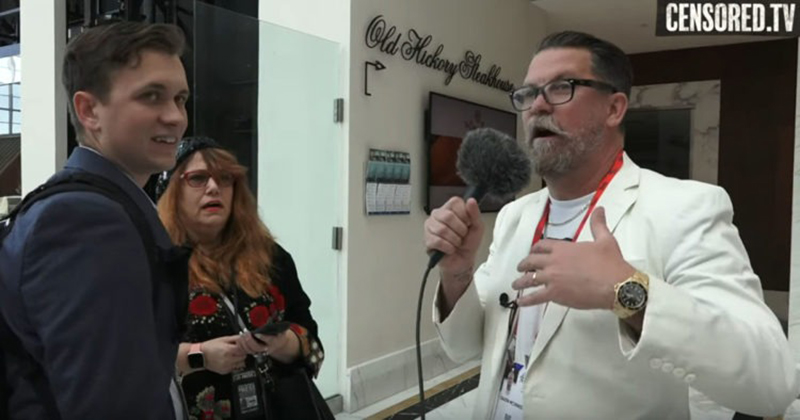 Video footage from Censored.TV shows Right Wing Watch’s Jared Holt scuttling away from a conversation with Gavin McInnes at the Gaylord Hotel in Washington, D.C.

McInnes initially points to Daily Beast employee and deplatforming advocate Will Sommer, calling out, “Oh look, there’s Will Sommer. Hey Will, you f**king p**sy, hey Will, you piece of s**t, you tattletale.”

The camera pans to show Sommer and Jared Holt, as McInnes continues, “That’s your career, you’re a tattletale. Nice job.”

“Oh, there’s Jared Holt,” McInnes exclaims. “Look, it’s the c**t squad. Look at these f**king horrible, weak losers. Look at these s**tty human beings. Your whole job is being a tattletale. What a bunch of f**king losers.”

Darrin McBreen and Outlaw Morgan expose how liberals are allowed to be as vile and disgusting as they want while conservatives get banished by the establishment for simply speaking their minds.

McInnes later approaches Holt with a microphone and asks, “Hey Jared, can we ask you some questions?”

Holt shifts his gaze and mumbles, “No, you’re going to have to contact my media person.”

McInnes presses Holt to agree to an interview, but the Right Wing Watch employee continues to tell McInnes to “contact my press liaison.”

“You look like milk, you look so weak,” McInnes tells Holt. “You know what you look like, someone has a glass of water and they just put in four drops of milk, you just seem to have this sort of sad acquiescence to you. You look like you could just spill all over the ground. Are you gay?”

“We’re done,” Holt says before walking away from McInnes, throwing furtive glances over his shoulder in the Vice co-founder’s diection.

The full video can be seen below:

Holt was later T-posed on by Groypers during an escalator ride, and chased out of a bar.