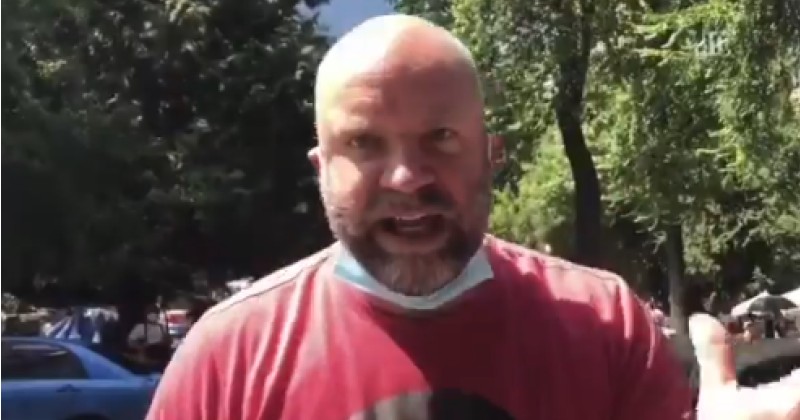 A video clip shows a white Black Lives Matter protester using the n-word and then claiming he’s allowed to because of rap music.

The footage shows the man trying to aggressively goad another man while he says, “Do something nigger!”

“What did you say to him?” asked another man filming the confrontation.

“I said to do something,” the BLM supporter responds.

“No after that?” asks the other man.

“Nigga, with an A!” responds the BLM supporter.

“So you’re here for Black Lives Matter but you’re using the n-word,” responds the man filming.

The BLM supporter then immediately becomes aggressive and justifies his use of the word by saying he’s been standing for hours with a BLM sign, before adding, “You goofy fucking white cunt.”

He then claims that because rap music exists, he’s allowed to use the n-word, a justification which is dismissively scorned in every other instance when it is used.

The agitator ends the conversation by accusing the other person of being a “stupid fucking white guy” while motioning to hit him before walking away.

If Trump supporters walked around calling people the n-word at a Black Lives Matter protest, they’d probably be attacked by a mob and beaten half to death.

This guy’s allowed to do it because he’s holding a small piece of cardboard with the letters BLM written on it.