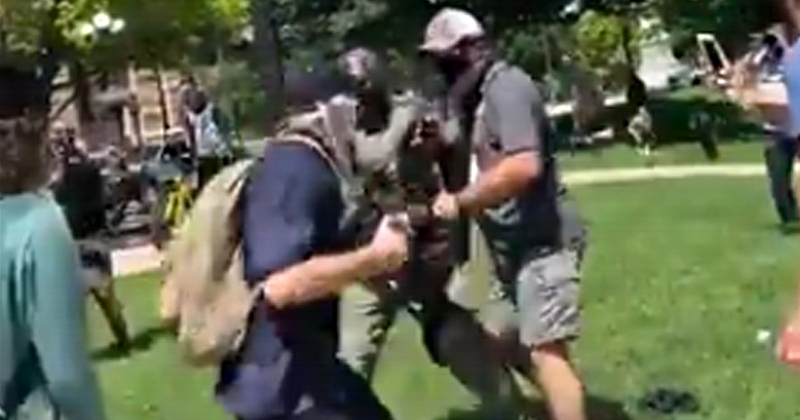 A group of white leftists, who claim to be “protesting” on behalf of the black community, were seen on video physically attacking a black police officer in Austin, Texas while berating him with racial slurs and taunts.

The video, uploaded to the Chinese Communist Party linked TikTok app by user @ahmed2001mo, appears to show the officer confiscating a backpack from a member of an AntiFa-style group participating in a Black Lives Matter demonstration outside the Texas State Capitol.

Don’t miss this shocking footage exposing the violence of Antifa

“Where’s your white (inaudible) friends to save you!?,” a member of the group can be heard shouting at the officer. As the group attempts to surround him, the shouts continue. “Piece of s—! They don’t care about you mother f—–!,” can be heard shouted while another group member shrieks “you can’t do that!” as the officer attempts to wrestle away control of the backpack from his attackers.

As the video plays on and the surrounded officer gains control of the backpack, the group begins fleeing, apparently after noticing the officer is armed. “He’s got a gun!” , “He’s shooting!” members of the group yell, although no shots were fired and the officer is not seen drawing his weapon.

As the crowd dispersed, members of the group could be heard calling the officer the “n-word” and an “Uncle Tom ass mother f—–” as he walks away and a fellow officer arrives on the scene.

Since the recent wave of civil unrest has swept the United States, radically left-wing, AntiFa-style groups have taken center stage on a number of occasions, with President Trump vowing to designate AntiFa as a domestic terror organization. Made up of mostly white, college-educated, 20 somethings from upper-middle-income to upper-income level families, AntiFa has been credited with inciting extremely violent riots in recent years, including those currently underway nationwide – which have claimed the lives of at least 17 Americans so far.

In a recent AntiFa attack on an Austin, Texas homeless camp documented by an InfoWars reporting crew, members of the newly-dubbed terrorist organization surrounded a homeless man on the street and burnt his belongings, including his mattress.