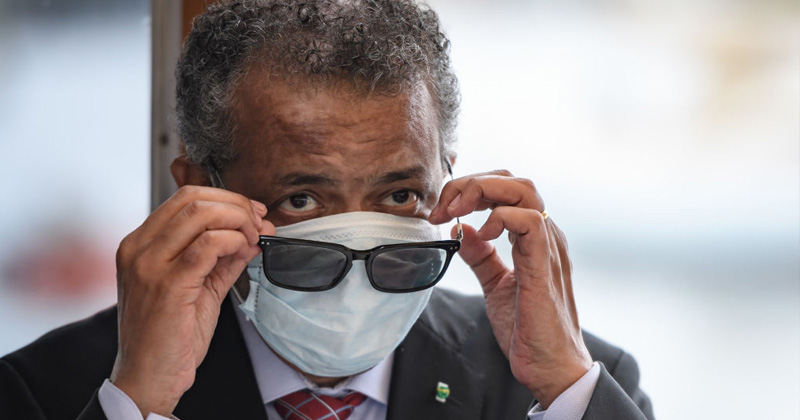 World Health Organization Director General Tedros Adhanom Ghebreyesus recently appeared before cameras to inform the world that “there will be no return to the old normal,” and that COVID-19 may never disappear, which means every human should live in a perpetual state of fear, as if every decision is a “life and death” decision.

Ghebreyesus criticized world leaders for sending “mixed messages” about COVID-19, and claimed that unless all countries in the world adhere rigidly to the advice given by the WHO, the “pandemic is going” to continue to “get worse and worse and worse.”

He continued, “Let me be blunt, too many countries are headed in the wrong direction. The virus remains public enemy number one. But the actions of many governments and people do not reflect of this.”

“The only aim of the virus is to find people to infect. Mixed messages from leaders are undermining the most critical ingredient of any response: trust.”

Ghebreyesus claims that “if governments do not clearly communicate with their citizens” and create “a comprehensive strategy focused on suppressing transmissions,” and that if citizens of these governments do not then agree to social distance, wear masks, and stay home when sick, then “there is only one way this pandemic is going to go: It’s going to get worse and worse and worse.”

The Director General also demanded people treat every decision about leaving the house, meeting with another person, or otherwise engaging in society as a “life and death” decision.

“We’re asking everyone to treat the decisions about where they go, what they do, and who they meet with, as life and death decisions,” said Ghebreyesus. “It may not be your life, but your choices could be the difference between life and death for someone you love, or for a complete stranger.”

The United Nations recently quoted Ghebreyesus, noting that the organization is urging “people everywhere to play a part in preventing further spread of the disease.”

After months of mishandling COVID-19, and blindly believing China’s claims about the virus, President Donald Trump recently cut all ties between the WHO and the United States.

“We have detailed the reforms that [the WHO] must make, and engaged with them directly, but they have refused to act. Because they have failed to make the requested and greatly needed reforms, we will be today terminating our relationship with the World Health Organization, and redirecting those funds to other worldwide and deserving other global public health needs,” President Trump added.

Even as local governments impose increasingly severe mask laws throughout the country, with some now threatening jail time to those who do not wear face masks, more evidence that the numbers of COVID-19 cases and deaths have been inflated continues to appear.

Today, National File reported that Reopen Florida activists discovered the case of one man, who was included in the COVID-19 death count for the state of Florida, actually died of “gunshot wound of head.”