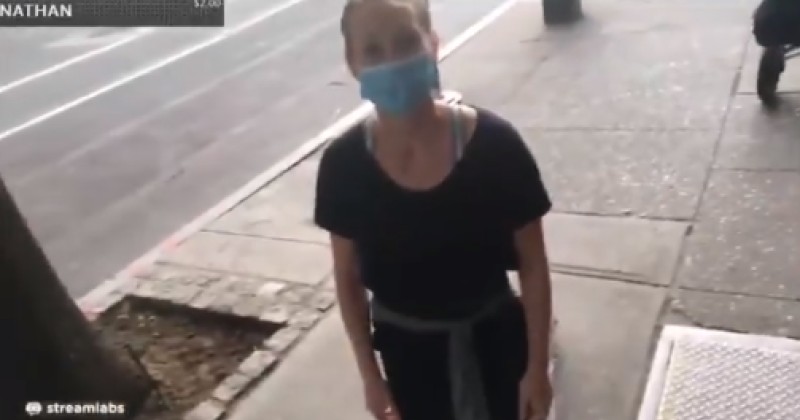 A video clip shows a woman immediately obeying a black man’s request to kneel on her feet in the street and apologize for her “white privilege”.

It’s possible that the man, who introduces himself to her as a member of Black Lives Matter, is trolling, but her reaction is priceless nonetheless.

“I work for Black Lives Matter…but since I work for that company my CEO has told me to come out today and to bring you on your knees because you have white privilege, so if they see that a white person is getting on their knees, that shows solidarity for the situation,” he says.

The woman, who is wearing a face mask, then immediately gets down on her knees in the middle of the sidewalk.

As someone in the midst of training a dog to sit, kneel, stay and roll over using hand motions, this is particularly disturbing: pic.twitter.com/eelNcsfmqw

The woman initially struggles for words before saying, “I’m incredibly sorry about…” before the man asks her to denounce Donald Trump, whom he refers to as “Donald Duck.”

“Thank you for letting me have that moment to apologize,” the woman states before leaving.

Throughout the interaction, the man is using hand gestures as if you would direct towards a dog you wanted to train to roll over.

As we highlighted yesterday, in another video clip a group of white people are seen apologizing and praying in front of a group of black people stood over them.

Police officers in numerous different cities have also taken a knee at the request of protesters, despite the country being rocked by violent riots during which cops have been attacked and shot at.