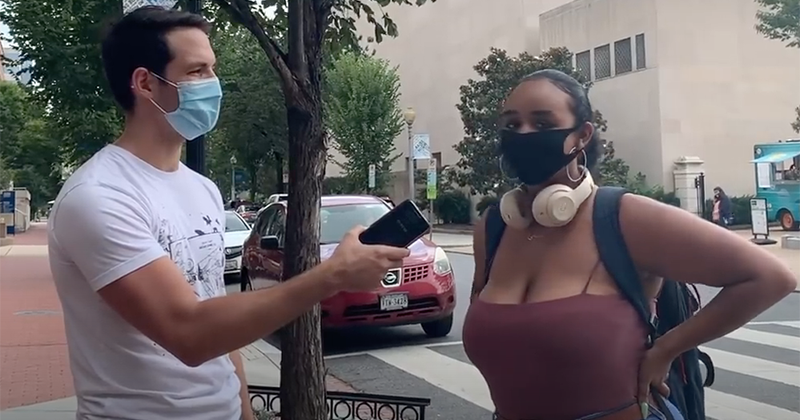 Canvassing the campus of George Washington University, Campus Reform found that the vast majority of college students believe that the nation-wide rioting and looting being carried out by black lives matter agitators is ‘justified’.

“In my opinion, it definitely can be justified given that’s the only way we can get our message out there,” one student commented.

“I’m in support of the riots personally, whatever you need to do to be heard,” another added.

Others said riots are “inevitable,” claiming that “if change is gonna come there’s gonna be some violence.”

Another stated “Honestly, I think it’s justified. People in power have stolen so much more. Anything that any of them loot will never match up to what’s been stolen from them,” while another student claimed rioting is “part of the healing process.”

Others complained that ‘White nationalists’ are just as violent.

“In the case of many white nationalist protests that have gotten violent, the conversation has never been about their looting or the violence they bring. It’s easier to characterize people of color as violent than white people I guess,” one student said.

Trump came swinging in his most recent rally speech in North Carolina, reminding us that the current present we see in the street of democratic cities will continue to destroy America and light our country ablaze if Biden wins.

A new study out of Princeton University reveals that 48 out of the 50 largest cities in the United States have experienced riots associated with the Black Lives Matter movement since late May.

Despite the leftist media’s obsession with calling the fiery violence ‘mostly peaceful’, the data indicates that most cities are seeing some violent unrest.

Democrats completely ignored the unrest for months, before polls indicated that favourability was tanking and they adopted the ‘this is Trump’s America’ mantra.

The rise of violence in large cities is a contributing factor in an ongoing exodus. A recent survey carried out by the Manhattan Institute found that two in five New Yorkers want to leave the city.