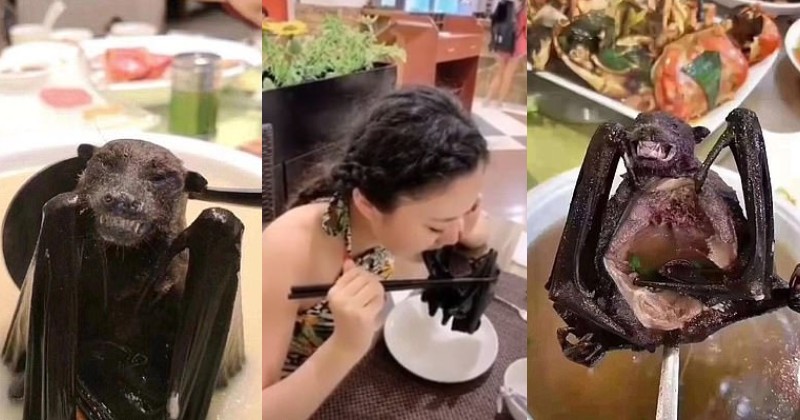 Two videos have emerged showing Chinese people eating bats as experts say the coronavirus currently sweeping the country may have spread to humans from snakes or bats.

One clip shows a young woman at a restaurant holding a bat with chopsticks as she bites into its wing.

“Eat the meat! [Don’t] eat the skin,” shouts a man in the background. “[You] should eat the meat on its back.”

Back in 2003, the GLOBAL outbreak of #SARS killed more than 8,000 people. #Bat, civet cats are believed to be the origin of #virus 🦠.#WuhanCoronavirus #coronavirus #China #WuhanPneumonia 🇨🇳pic.twitter.com/xZqGlkU44d

The bat had been dunked in a large bowl of soup in the middle of the table. Lovely.

Another video shows a cooked bat with what appears to be a grin on its face dumped in a bowl of broth.

“[After] experiencing this matter, can Chinese people give up eating wildlife?” asked the blogger who posted the video.

Another video shows a Chinese person eating baby rats that are still alive. He even dunks them in a sauce. Gross.

Eating rats is quite common in some cities in China. Rats, Bats, Cats, Dogs, Insects…….creatures having wings, legs are eatable for some Chinese people. They don't fear souls or upcoming damage which may terror the world! 在中国有些地方吃老鼠是常见的。 #coronavirus pic.twitter.com/ZWaMqBjIuW

Chinese people consume bats, and even bat poop, because they believe it has medicinal properties that can treat malaria, gonorrhea and eye diseases.

However, bat soup is known to be a popular dish in Wuhan, where the coronavirus outbreak originated, and scientists say that the virus shares a strain of virus found in bats.

According to China Science Bulletin, the new virus could have been passed from bats to humans.

This serves as a reminder that despite the current push by the media to normalize the consumption of all kinds of weird things, from worms to crickets, sometimes it can be incredibly dangerous.

As I highlight in the video below, one of the dominant arguments is based in cultural relativism; The notion that because people from other cultures think it’s normal that we should embrace it too.

Some Chinese people think eating dogs is normal too. They also eat chicken’s heads and, even at the risk of infection, bats and bat poop.

Some cultures are better than others.