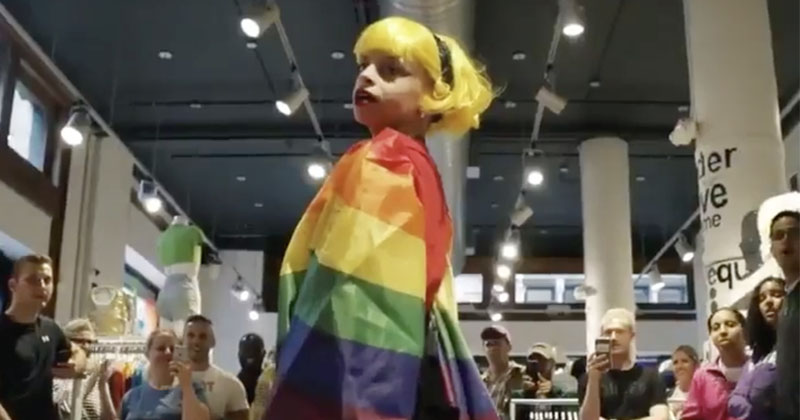 Desmond Is Amazing, the establishment’s 11-year-old poster child for pedophilia normalization, discusses his life as a “drag kid” living in New York City, and his relationship with the LGBTQ community.

This 11-year-old drag kid is using his voice to encourage LGBTQ youth to be themselves: https://t.co/wr3c9Fim7N via @CNBCMakeIt pic.twitter.com/KhhyKe0Ygy

“I’ve been doing drag since I was 2 years old,” Desmond told NBC.

Desmond’s mother Wendy Napoles described curating his social media so that “haters” are blocked so Desmond can “interact with his fans.”

“I always go on his social media several times a day and kind of remove the hate comments so that he can go on there and interact with his fans,” Napoles said.

She denied pedophilia is involved in Desmond’s lifestyle, saying that was just a “narrative” perpetuated by “the haters.”

“A lot of people want to say that Desmond is trans. He’s not trans,” she told NBC. “People like to say that we forced him to do this or we’re sexualizing him, but again, that’s their narrative.”

Desmond Is Amazing made headlines just last month after reports emerged that the 11-year-old had stripteased on stage late-night to a crowd of adult men throwing dollar bills at him.

Separate viral video of the child sent outrage across social media when it showed Desmond imitating snorting ketamine and referencing pedophilia by saying “LGBTPQ” next to an adult crossdresser who also talked about snorting the drug off of a couch.

I was sent this video where Desmond appears with an adult and repeats the phrase "LGBTPQ". That P stands for pedophilia. The adult discusses taking Ketamine and 11 year-old Desmond sniffs an imaginary bump off his arm. Where is child protective services? https://t.co/RUYebOm92K

Yet other footage shows the child with convicted murderer Michael Alig, who butchered a clubgoer in the 1990s, with a portrait of the word “Rohypnol,” a date-rape drug, behind them.

It’s also widely accepted that the pedophilia community is not some myth, but alive and well – and even protected – on social media, as reported by Mindy Robinson.

This is just the latest example of the establishment’s pedophiliac agenda, which shows no signs of slowing.

Pervert Press Promotes The Sexualization Of Your Children:

The phrase “learn to code” is coming under fire for being “abusive behavior”. Owen Benjamin exposes the double standard that explains why SJWs are called “snowflakes”.