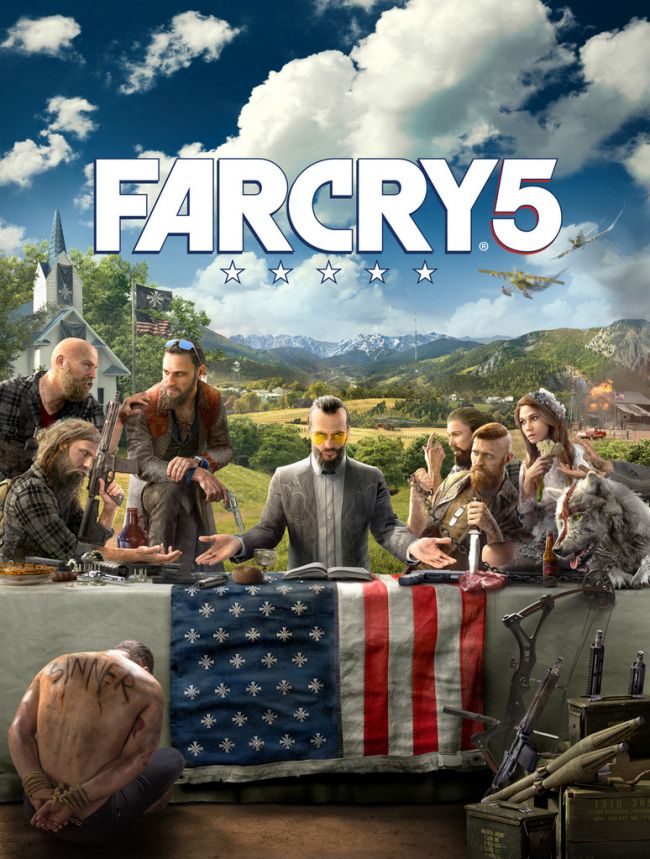 A graphic for the latest installment of the video game series Far Cry indicates white Christian Americans from Montana will be the antagonists.

“Far Cry 5 will tell the story of a militant Christian cult, if a piece of artwork released today by publisher Ubisoft is any indication,” reports gamer site Polygon.

A shocking promotional illustration features a group of flannel-wearing bearded rednecks sat around a table in poses similar to that of “Jesus’ Last Supper.” (see below)

The characters are armed and a slew of guns are strewn across the table with apple pie, a bible and red meat nearby. A bound and beaten man with the word “SINNER” carved into his back sits in front.

“The image calls to mind the 2016 occupation of the Malheur National Wildlife Range, in which armed militants in cowboy hats and rugged button-downs seized the headquarters of the park located in Harney County, Oregon,” writes The Verge. “Though it’s likely work began on Far Cry 5 before the incident, as video games takes years to conceptualize, greenlight, and develop.”

Far Cry 5 stands out as it’s the first in the series to let gamers mow down Americans (albeit fictitious), not mutants or foreigners.

“Previous Far Cry games have been set in remote locales crawling with fictional villains (and even mutants at one point—how far it’s all come) and were easy to dismiss as pleasantly distant and fully fictional,” PC Gamer notes.

The latest Far Cry follows a growing trend in video games to cast Americans as the enemy, according to The Verge:

“Resident Evil 7 sets its hero against a pseudo-zombified white family in the American bayou, while Outlast 2 draws horror from an American religious cult. Mafia 3 follows Lincoln Clay, a mixed-raced Vietnam vet, who takes revenge on the Italian mob in 1970s Louisiana after the assassination of his father figure, the leader of the black mob. And an episode of Hitman, called “Freedom Fighters,” has the titular killer assassinating targets on a Colorado compound that seemed to take at least some inspiration from the real-world incident in Harney County.”

The game is set to be fully revealed on Friday.